Per pool at DMZ, Pence just said: "the era of strategic patience is over." Which means what, exactly?

* Both Kevin Drum and Josh Marshall write convincingly today that there are no good options when it comes to dealing with North Korea. But they missed an interesting development that seems to have been embraced by President Obama.

Three years ago, President Barack Obama ordered Pentagon officials to step up their cyber and electronic strikes against North Korea’s missile program in hopes of sabotaging test launches in their opening seconds.

Soon a large number of the North’s military rockets began to explode, veer off course, disintegrate in midair and plunge into the sea. Advocates of such efforts say they believe that targeted attacks have given American antimissile defenses a new edge and delayed by several years the day when North Korea will be able to threaten American cities with nuclear weapons launched atop intercontinental ballistic missiles.

* A lot of people are commenting on this new polling from Gallup today. 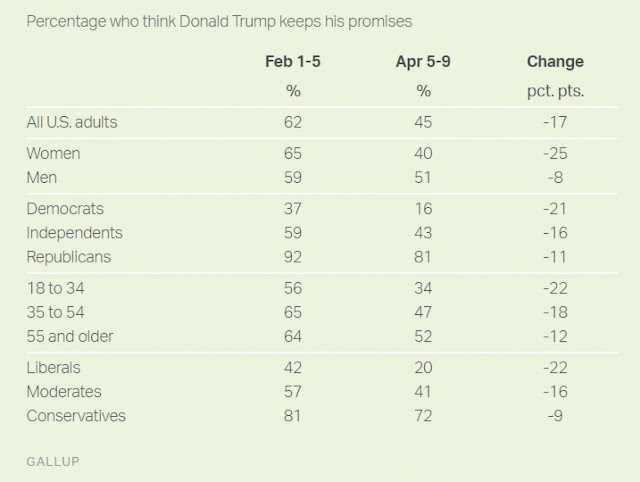 * A lot of the chatter about the “Game of Thrones” going on in the White House focuses on a battle between Steve Bannon and Jared Kushner. For awhile now I’ve been keeping by eye on this one.

Cohn, 56, did not work on Republican Trump’s campaign and only got to know him after the November election, but he has emerged as one of the administration’s most powerful players in an ascent that rankles conservatives.

Trump refers to his director of the National Economic Council (NEC), as “one of my geniuses,” according to one source close to Cohn.

More than half a dozen sources on Wall Street and in the White House said Cohn has gained the upper hand over Trump’s chief strategist, Steve Bannon, the former head of the right-wing website Breitbart News and a champion of protectionist trade opposed by moderate Republicans and many big companies.

* At one point Trump appeared to back off of his “deport ’em all” strategy with undocumented immigrants and said that he would focus on criminals. That was yet another lie.

Immigration arrests rose 32.6 percent in the first weeks of the Trump administration, with newly empowered federal agents intensifying their pursuit of not just undocumented immigrants with criminal records, but also thousands of illegal immigrants who have been otherwise law-abiding.

U.S. Immigration and Customs Enforcement arrested 21,362 immigrants, mostly convicted criminals, from January through mid-March, compared to 16,104 during the same period last year, according to statistics requested by The Washington Post.

Arrests of immigrants with no criminal records more than doubled to 5,441, the clearest sign yet that President Trump has ditched his predecessor’s protective stance toward most of the 11 million undocumented immigrants in the United States.

* In case you haven’t heard, Republicans really want to kill the Consumer Financial Protection Bureau that Sen. Elizabeth Warren fought so hard to have included in the Dodd-Frank Wall Street Reform bill. Their latest efforts involve a court case (PHH v. Consumer Financial Protection Bureau) in which the structure of the CFPB is being challenged as unconstitutional. It probably won’t surprise you that the Department of Justice has recently switched sides.