* Attorney General Jeff Sessions testified at the Senate Intelligence Committee this afternoon. His demeanor was in sharp contrast to former FBI Director Comey’s recent appearance. The latter was calm, confident and very well-prepared while the Attorney General seemed nervous and defensive. Here’s a quick summary from Josh Marshall:

Big picture: Sessions refused to answer the biggest questions; he was almost certainly not telling the truth about what triggered his refusal. Most of the rest was atmospherics.

I’ll have more on this story tomorrow.

* One thing has become clear about Donald Trump: if you decide to work with him, it is very likely that he’ll eventually throw you under the bus. Today was House Speaker Paul Ryan’s turn.

President Donald Trump told Republican senators Tuesday that the House-passed health care bill is “mean” and urged them to craft a version that is “more generous,” congressional sources said.

The president’s comments, at a White House lunch with 15 GOP senators, came as Senate Republican leaders’ attempts to write their own health care package have been slowed by disagreements between their party’s conservative and moderates.

Trump’s remarks were a surprising critique of a Republican-written House measure whose passage he lobbied for and praised. At a Rose Garden ceremony minutes after the bill’s narrow House passage, Trump called it “a great plan.”…

* According to Gallup, today Trump reached another historical marker.

Trump first president ever to hit 60% disapproval in his first year. https://t.co/zeUhr9IWfI

* It is almost humorous to watch the lengths to which right wing publications will go to defend Trump. I actually had to laugh at one from the Daily Caller today. Their headline reads, “CONFIRMED: Obama Had His Own ‘Back Channel’ To Moscow.”

The Obama administration had a “back channel” to communicate with Russian officials, according to a new report detailing Moscow’s efforts to delegitimize the U.S. presidential election results.

The news comes after Trump White House aide Jared Kushner was criticized for allegedly trying to open a back channel line of communications with Russian officials during the transition last year.

Former intelligence officials called Kushner’s alleged back channel “dangerous,” but now Bloomberg reports the Obama administration had its own back channel to Moscow.

The White House contacted the Kremlin on what Bloomberg described as a “modern-day red phone” after Russian operatives tried to infiltrate software and databases used by state election officials.

This is from the same Bloomberg report I wrote about earlier today, which reported that this so-called “back channel” is “a secure messaging channel for sending urgent messages…designed to de-escalate cyber conflict between the two countries.” Notice that nowhere does it suggest that it was set up to bypass U.S. intelligence services, which was the whole purpose of the one that Flynn, Kushner and Prince were trying to set up for the Trump administration.

* Attorney General Sessions isn’t just up to his eyeballs in the whole Trump/Russia investigation, today we learned this:

Attorney General Jeff Sessions is asking congressional leaders to undo federal medical marijuana protections that have been in place since 2014, according to a May letter that became public Monday.

The protections, known as the Rohrabacher-Farr amendment, prohibit the Justice Department from using federal funds to prevent certain states “from implementing their own State laws that authorize the use, distribution, possession or cultivation of medical marijuana.”

In his letter, first obtained by Tom Angell of Massroots.com and verified independently by The Washington Post, Sessions argued that the amendment would “inhibit [the Justice Department’s] authority to enforce the Controlled Substances Act.”…

Sessions’s citing of a “historic drug epidemic” to justify a crackdown on medical marijuana is at odds with what researchers know about current drug use and abuse in the United States. The epidemic Sessions refers to involves deadly opiate drugs, not marijuana. A growing body of research (acknowledged by the National Institute on Drug Abuse) has shown that opiate deaths and overdoses actually decrease in states with medical marijuana laws on the books.

I wrote about that “growing body of research” here.

* So far, Donald Trump has fired Sally Yates and James Comey. But he also fired Preet Bharara, the United States Attorney for the Southern District of New York, along with all of the other US Attorney’s who hadn’t already resigned. But Bharara’s was particularly noteworthy, and now we learn this:

Marc Kasowitz, President Donald Trump’s personal lawyer in the Russia investigation, has boasted to friends and colleagues that he played a central role in the firing of Preet Bharara, the United States Attorney for the Southern District of New York, according to four people familiar with the conversations.

Kasowitz told Trump, “This guy is going to get you,” according to a person familiar with Kasowitz’s account.

* Finally, on a lighter note, all you need for this story is the headline and a picture. The headline reads: “NYC Subway Bans Dogs Unless They Fit Into A Bag, And New Yorkers’ Solution Is Hilariously Clever.” 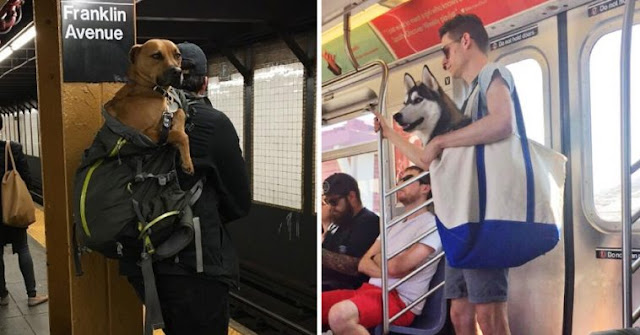 Ahhh…those crazy “coastal elites.” What will they think of next?