Over the course of the last six months, we’ve been given plenty of evidence that our 44th and 45th presidents are about as polar opposite as any two human beings could be. Today brought us a reminder of that—especially when it comes to how they treat their staff.

Apparently the Trump organization has found itself in a bit of a kerfuffle with the people who are tasked with protecting the president’s life.

The Secret Service has vacated its command post inside Trump Tower in Manhattan following a dispute between the government and President Trump’s company over the terms of a lease for the space, according to two people familiar with the discussions.

As a former Obama staffer pointed out, this is probably not a smart move.

Nickel and diming the people who sign up to take a bullet for you is a bad way to go through life https://t.co/evoElXoI6z

But this is hardly the first time we’ve seen this president demonstrate that he doesn’t understand the importance of respecting his staff. Think: Sean Spicer, Jeff Sessions, etc. That is the kind of thing that leads to the chaos that is emanating from this White House.

Today is Barack Obama’s 56th birthday, and so there’s a lot of chatter about him. As a result, I just read a story about his relationship with the secret service (and other staffers) that I hadn’t heard before. It comes from Michael Lewis, who spent 6 months hanging around Obama to write a profile in Vanity Fair back in 2012. You can watch him tell the story at about 26:30.

“I will tell you this. The people who work for him love him. Love him. It isn’t worshipful they just really love the guy. And it is because he treats them well. He treats people very well.

“The Secret Service that protect him love him. He wears this watch that’s this goofy looking watch. It looks like a scuba diving watch. Its got all the knobs and you look over it and you expect to see an odometer on it. It is so out of character because everything about him is so spare and minimalist. At some point I said, ‘You know, your watch just doesn’t fit you. It is an odd thing that you have that watch. That watch is a geeky, dorky watch. And you’re kind of cool and that’s kind of odd.’ And he said, ‘I’ll tell you about this watch. When I was running the campaign–the first campaign–Michelle and I just started inviting the Secret Service in. They weren’t getting fed when they were watching me. So we would have them in.’ And they said–I don’t know if I can say this–previous Presidents didn’t treat them that way. And the Secret Service pooled their money to give him this watch. And he wore it because of that.

Along those same lines, here is a quote from the article in Vanity Fair by Lewis that immediately grabbed me:

His desire to hear out junior people is a warm personality trait as much as a cool tactic, of a piece with his desire to play golf with White House cooks rather than with C.E.O.’s and basketball with people who treat him as just another player on the court; to stay home and read a book rather than go to a Washington cocktail party; and to seek out, in any crowd, not the beautiful people but the old people. The man has his stat­us needs, but they are unusual. And he has a tendency, an unthinking first step, to subvert established stat­us structures.

All of that is why this has always been one of my favorite pictures of our 44th president. 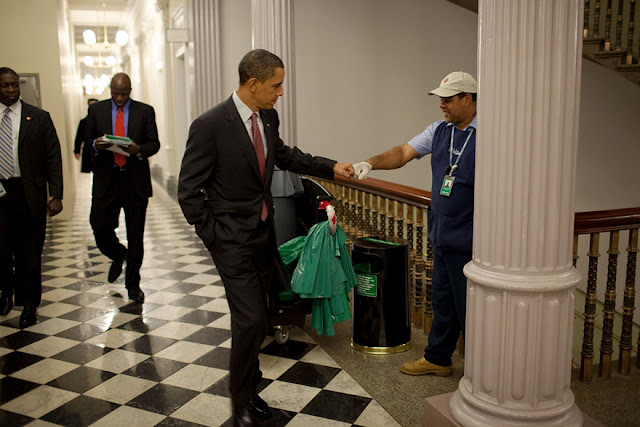 If anyone is interested in pointers on what to look for in a leader…that’s a great place to start.