* After blustering about fire and fury against North Korea, Trump started his day by engaging in his normal routine…lying on twitter.

My first order as President was to renovate and modernize our nuclear arsenal. It is now far stronger and more powerful than ever before….

* Here’s the fact-check from David Graham:

This was not only false, but easily proven false. Trump’s first order as president, on January 20, was an “Executive Order Minimizing the Economic Burden of the Patient Protection and Affordable Care Act Pending Repeal.”

* Jonathan Chait writes that our government is basically telling North Korea to ignore our crazy president.

It is humiliating for the world’s greatest superpower to disregard its president as a weird old man who wanders in front of microphones spouting off unpredictably and without consequence. But at this point, respect for Trump’s capabilities is a horse that’s already fled the barn. New chief of staff John Kelly has supposedly instilled military-style order and message discipline into the administration, but Trump is unteachable. Minimizing the havoc means getting everybody to pretend Trump isn’t really president.

FBI agents raided the Alexandria home of President Trump’s former campaign chairman [Paul Manafort] late last month, using a search warrant to seize documents and other materials, according to people familiar with the special counsel investigation into Russian meddling in the 2016 election.

You don't get a search warrant without probable cause. https://t.co/ue8tov9AeI

* There is one word to describe this: deplorable.

Republican Sen. Ron Johnson of Wisconsin said Tuesday that he thinks that Sen. John McCain’s brain tumor and the early morning hours may have affected the Arizona Republican’s no vote on the Senate bill to repeal Obamacare.

* Does this surprise anyone?

Vegetable prices may be going up soon, as a shortage of migrant workers is resulting in lost crops in California.

Farmers say they’re having trouble hiring enough people to work during harvest season, causing some crops to rot before they can be picked. Already, the situation has triggered losses of more than $13 million in two California counties alone, according to NBC News.

The ongoing battle about U.S. immigration policies is blamed for the shortage. The vast majority of California’s farm workers are foreign born, with many coming from Mexico.

* We’re hearing a lot about Trump’s declining support in the polls. Ron Brownstein breaks it down.

Even as the White House this week firmly insists President Donald Trump is determined to seek a second term, a new analysis of polling data shows that he’s caught in a three-way political squeeze in the states that tipped the 2016 presidential race, and will likely decide the 2020 contest.

On one front, Trump faces undiminished resistance from minority voters, who opposed him in preponderant numbers last year. On the second, he is confronting a consistent — and, in many states, precipitous — decline in support from white-collar white voters, who expressed much more skepticism about him last fall than GOP presidential candidates usually face. From the third direction, Trump’s support among working-class whites, while still robust, is receding from its historically elevated peak back toward a level more typical for Republican presidential candidates — especially in the pivotal Rust Belt states that sealed his victory.

* Finally, Tom Toles nails it today with his cartoon titled: A negotiated settlement with North Korea faces a unique problem. 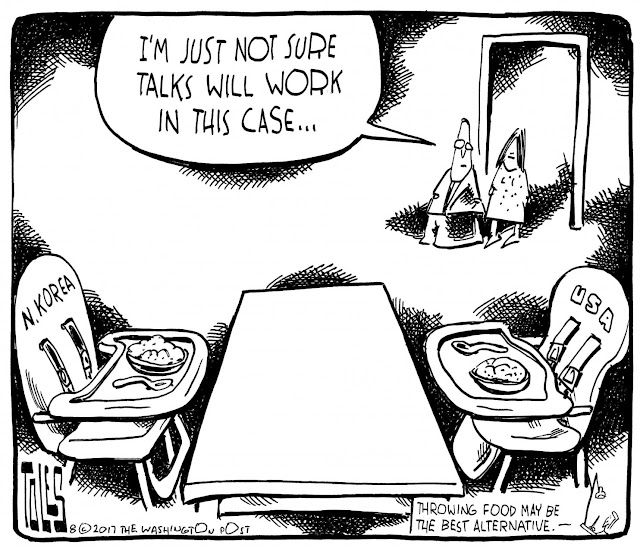