* A couple of big items on the Trump/Russia story broke today. Here’s one from the New York Times:

A business associate of President Trump promised in 2015 to engineer a real estate deal with the aid of the president of Russia, Vladimir V. Putin, that he said would help Mr. Trump win the presidency.

The associate, Felix Sater, wrote a series of emails to Mr. Trump’s lawyer, Michael Cohen, in which he boasted about his ties to Mr. Putin and predicted that building a Trump Tower in Moscow would highlight Mr. Trump’s savvy negotiating skills and be a political boon to his candidacy.

“Our boy can become president of the USA and we can engineer it,” Mr. Sater wrote in an email. “I will get all of Putins team to buy in on this, I will manage this process.”

Michael Cohen, a Trump attorney and executive vice president for the Trump Organization, sent the email in January 2016 to Dmitry Peskov, the Kremlin’s top press aide.

* Here’s some perspective from Chris Hayes:

Again the incredible irony that not a single Clinton/Podesta email was as incriminating as the *two* Trump campaign emails we've seen. https://t.co/JYxf7U6QDZ

Here’s another tweet that captures what’s going on pretty well:

"Connecting the dots" is becoming "look at all those dots directly on top of each other, a coincidence that defies all laws of mathematics." https://t.co/cVr0ZJkr2W

* Will Sec. of State Rex Tillerson be the next Trump official to go? According to Jonathan Swan, that’s the latest scuttlebutt. This response to Chris Wallace over the weekend adds even more intrigue to the possibility.

* Jared Kushner is in the Middle East working on a peace deal between Israel and the Palestinians that is turning out to be just a bit more complicated than Trump initially claimed. Here’s the latest:

On Thursday: @jdgreenblatt45 and Kushner asked Netanyahu "to create an environment conducive to peacemaking."
Today:https://t.co/nWIgDXfpX6

* Friday night was pretty crazy on twitter as Hurricane Harvey was reaching shore, Trump pardoned Arpaio, the White House was leaking that the president was prepared to end DACA and Sebastian Gorka was fired/resigned.

A Nazi resigned from the White House staff and it's like the fourth biggest story tonight.

* Ready for some good news? Here’s some:

After a series of fits and starts, Illinois Governor Bruce Rauner will sign an automatic voter registration bill on Monday…

According to the bill, automatic voter registration will be run through the Secretary of State’s office, with implementation scheduled to be completed in time for the 2018 elections.

The bill will allow voters to be automatically registered to vote through an electronic process when they’re applying for a driver’s license or a state ID, unless they opt out.

The Brennan Center provides this map of the 10 states that now have some form of automatic voter registration: 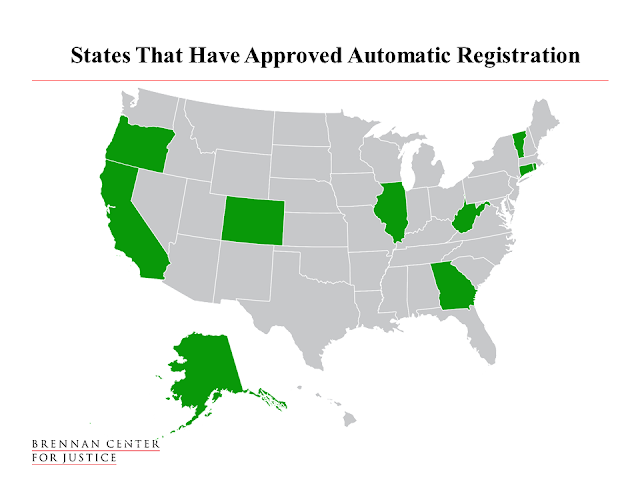 * Here is your “on this date in history” lesson. On August 28th:

1955 – Emmett Till was murdered
1963 – Rev. Martin Luther King, Jr. gave his “I Have a Dream Speech”
2008 – Barack Obama accepted the Democratic nomination for the presidency

* Finally, Pink has produced music that touches me personally on many levels—the political junkie, the rebel, the vulnerable loner. Hers is the kind of feminism that scares those who pine for a nostalgic past of women who reached for only one kind of beauty and did as they were told. But her feminism is also the kind that lovingly says, “just be you” to every child, which is what it’s all about. Here she is with a powerful message at the VMAs last night.