* As Trump and Republicans zero in on tax reform, the question is whether or not they learned anything from their failed efforts to repeal Obamacare. It sure doesn’t look like it.

The closed-door process under which Republican congressional leaders and the Trump administration are crafting an overhaul of the United States tax code could impede the Senate’s timeline for the effort.

Lawmakers say they have yet to receive key details, making it difficult to craft a fiscal 2018 budget resolution that will ultimately serve as the vehicle to advance the tax bill…

While there is a renewed commitment to get a tax overhaul complete this year, Republican senators expressed concern that the secretive process that ultimately doomed the effort to repeal the 2010 health care law will happen again.

“Health care should teach us something around here. If you don’t have a plan, you make it up as you go, you’ll wind up failing. Learn something from health care,” South Carolina Sen. Lindsey Graham said Thursday.

While members of that group say they have made good progress, Republican senators have yet to receive any substantive information about it.

* As Senators Manchin, Heitkamp and Donnelly prepare for their dinner at the White House tonight to talk about tax reform, Bernie Becker and Aaron Lorenzo document what each of them is most interested in pursing on the topic.

Donnelly said in a statement that he wanted to work with the president on an issue that he said the two discussed over lunch some months ago — how tax reform can prevent companies from moving jobs offshore. The Indiana Democrat has worked on that issue for years, but a recent Associated Press report found that a Donnelly family business relied on Mexican labor…

Heitkamp has said that any tax overhaul needs to protect working families and retirees, while Manchin added that he couldn’t back any tax overhaul that added to the federal debt and opposed using a budget process that would allow Republicans to rewrite the tax code with a simple majority in the Senate…

But Manchin broke with his party by saying he was open to cutting taxes for the wealthy and corporations in a revamped system.

“I’ve got some people who say, ‘Well, if you reduce 39.6 [percent] to 35, I can’t do that,’” Manchin said, referring to a potential cut in the top tax rate paid by individuals. “Well, if 35 brings in more than 39.6 because we got rid of a lot of the offsets and credits, I’m going to look at everything. That’s why I’m not going to sign on to an artificial letter.”

* The Center for Budget and Policy Priorities summarized the recent Census Bureau report on income, poverty and health coverage.

Economic progress lowered poverty and lifted median household income to its highest level in at least nine years, Census data released September 12 show, while the continuing effectiveness of the Affordable Care Act (ACA) pushed the uninsured rate down to a new record low.

Coming on top of large gains in 2015, the Census data show that the typical household’s income rose more from 2014 to 2016 — by 8.5 percent or $4,600 — than in any other two-year period on record, with data back to the 1960s. This also marks the first time on record that income, poverty, and health coverage all improved for two consecutive years; these data go back to 1988. 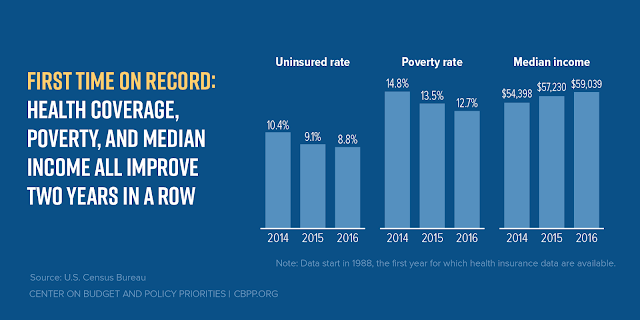 * McConnell says that the Democrats shouldn’t celebrate too much about winning the negotiations over a short time horizon for raising the debt ceiling.

“Since I was in charge of drafting the debt ceiling provision that we inserted into the flood bill we likely — almost certainly — are not going to have another debt ceiling discussion until well into 2018,” McConnell told the Times. “One of the advantages of being the majority leader is you control the paper.”

* Last week Martin wrote about the attempt in Congress to make Trump eat his words about the events in Charlottesville. Phase one of that process has been successfully completed.

The Senate has approved a resolution condemning white supremacists, neo-Nazis and other hate groups following a white-nationalist rally in Virginia that descended into deadly violence.

Democratic Sens. Mark Warner and Tim Kaine of Virginia introduced the measure along with four colleagues from both parties. The resolution, approved unanimously Monday night, recognizes a woman who was killed Aug. 12 and 19 other people who were injured after a car allegedly driven by a neo-Nazi slammed into a crowd of demonstrators protesting the rally in Charlottesville…

The joint resolution now goes to the House, where identical language has been introduced by Virginia Reps. Tom Garrett and Gerry Connolly with support from the entire Virginia House delegation. If adopted by both chambers, the resolution would go to the president.

* Finally, a couple of weeks ago I noted that I had recently been introduced to Lizz Wright. Her latest album “Grace” will be released this week. Here is what she told Jewly Hight about it:

Before completing the album with producer Joe Henry, she took a road trip through the rural South, reacquainting herself with the people and places she came from. She told me that there was an urgency to the journey: “I need to remember what I know to be my home …and the way people relate and the way Southern people work, the way they cooperate, the way they’re in tune with the earth. I need to study that right now for my own well-being, because I know the truth. I know my life.”

That sentiment comes through loud and clear on this track.