* As we’ve recently learned, Steve Bannon, with the backing of billionaire Robert Mercer, is planning to mount primary challenges against some “establishment” Republicans. Adele Stan reports that this is actually a battle of the oligarchs.

As Republican leaders fret over a possible loss of control of the Senate due to Bannon’s actions, they fail to notice that Bannon is not playing a short-term game for GOP majorities in Congress. Bannon’s game is one for control of the Republican Party writ large.

It’s clear that Mercer has no small amount of envy for the Koch brothers, the billionaire siblings whose will has largely shaped the GOP agenda as the party became ever more dependent on the political infrastructure built by the Kochs and the donor network they have cultivated over the course of decades. No longer insurgents, the Kochs and their political beneficiaries have become part of the GOP establishment…

Bannon and his patron Mercer, it seems, are willing to take their chances on the possible loss of the GOP’s narrow Senate majority if the gambit places Mercer in the kingmaker’s seat, supplanting the Koch brothers in that role. But there’s a fly in that ointment, for nearly all Republican lawmakers depend on the Koch brothers’ political apparatus in order to win re-election, especially the get-out-the-vote operations of Americans For Prosperity, and the data firm i360. Bannon seems to be betting that AFP will turn out the vote for any Republican who runs for the Senate…

Grab the popcorn…this could get very interesting!

* Chris Strohm reports on a particular focus of the Mueller investigation.

Russia’s effort to influence U.S. voters through Facebook and other social media is a “red-hot” focus of special counsel Robert Mueller’s investigation into the 2016 election and possible links to President Donald Trump’s associates, according to U.S. officials familiar with the matter.

Mueller’s team of prosecutors and FBI agents is zeroing in on how Russia spread fake and damaging information through social media and is seeking additional evidence from companies like Facebook and Twitter about what happened on their networks, said one of the officials, who asked not to be identified discussing the ongoing investigation.

One of the reasons that is important is because, should they uncover evidence of coordination with the Trump campaign, it leads straight to Jared Kushner’s door.

* Remember when Trump accused former National Security Advisor Susan Rice of breaking the law for unmasking names contained in U.S. intelligence probes? Today we learned about why she did that in at least one instance.

The New York meeting preceded a separate effort by the UAE to facilitate a back-channel communication between Russia and the incoming Trump White House.

That reference to a separate effort by the UAE to facilitate back-channel communication between Russia and the Trump White House is in reference to this story:

The United Arab Emirates arranged a secret meeting in January between Blackwater founder Erik Prince and a Russian close to President Vladi­mir Putin as part of an apparent effort to establish a back-channel line of communication between Moscow and President-elect Donald Trump, according to U.S., European and Arab officials.

* I never commented on the whole kerfuffle about Louise Linton (Treasury Secretary Steve Mnuchin’s new wife) because it was simply the kind of gossipy thing that happens on an episode of Real Housewives. But these two are perfect examples of people who really don’t have a clue.

Secretary Steven Mnuchin requested use of a government jet to take him and his wife on their honeymoon in Scotland, France and Italy earlier this summer, sparking an “inquiry” by The Treasury Department’s Office of Inspector General, sources tell ABC News.

* In reporting on Democrats who have signed on to support Sanders’ single payer plan, reporters at the New York Times provided this chart, which is based on the voting records of each Senator. 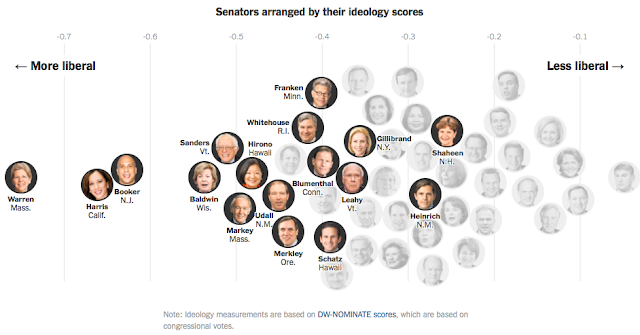 I have never been one to put much stock in the idea of a linear scale to measure where people sit on a continuum from left to right. But I must admit that I got a kick out of the way voting records upend some of the conventional wisdom we’ve been hearing lately, with Senators like Harris and Booker showing up pretty far to the left of Sanders.

* Finally, here is a little bit more about what Barack Obama is up to these days.