* The problems Republicans face in passing tax reform are the same ones that have kept them from getting anything else accomplished legislatively. First of all, they don’t agree.

But Republicans remain divided on key details: whether they can meet Mr. Trump’s demand for a 15 percent corporate tax rate; which small businesses and partnerships would qualify for a new low business tax rate; whether tax cuts in the package should be paid for by closing loopholes; and whether hedge fund and private equity managers would continue to see their huge fees taxed at the low rate of capital gains instead of at income tax rates.

* Secondly, they have a president who makes unreasonable demands because he doesn’t know what he’s talking about.

China has a business tax rate of 15%. We should do everything possible to match them in order to win with our economy. Jobs and wages!

Dear @realDonaldTrump CHINA'S STANDARD CORPORATE TAX RATE IS 25% A good way to "win the economy" is work off of correct information https://t.co/92WoZAv3lM

* Thirdly, the president has a pretty skewed definition of bipartisan.

President Trump got a lot of attention for his Tuesday night dinner with three red-state Democratic senators, where he tried to win their support for tax reform. But here’s the thing: This was not the start of a bipartisan tax reform effort. This was the White House’s attempt to give Republicans a cushion in case they lose a few votes.

An administration official tells me the three Democratic senators — Joe Manchin, Heidi Heitkamp and Joe Donnelly — were invited because they were considered the most likely to be open to a Republican tax reform plan.

* I wanted to include this story because in the coming months we’re likely to hear that Obamacare is a failure because fewer people are signing up on the exchanges and premiums are going up. The thing is…that is exactly what CBO just predicted will happen because of sabotage by the Trump administration.

In particular, the CBO reported that although the individual market will be relatively stable going forward under current law, signups this fall are likely to be suppressed because of the Trump administration’s decision to cut 90 percent of the Obamacare advertising budget and nearly half of the budget for navigators who help people around the country enroll…

The report also predicted premiums will be driven up next year due to ongoing uncertainty around whether the Trump administration will cut off payments for Obamacare’s cost-sharing reduction subsidies to insurers.

* Can somebody please explain this one to me? I know…it’s all about tribalism. But this is just nuts.

When Obama was in office, only 30% of white evangelicals would forgive a president's immoral behavior. Now it's 72%. https://t.co/c6FlHbziMi pic.twitter.com/VTNov7TJRk

* Finally, I thought this tweet from former Congressman Joe “You Lie” Walsh is perhaps the clearest distillation of the Republican message that I’ve seen in a long time: “It’s all on you.”

I know this kind of response crops up because right now in this country there are a lot of people who are beginning to talk about whether access to health care is a right. That makes it one of those moral questions I wrote about this week. And perhaps FDR provided the best distillation of the Democratic message with this: 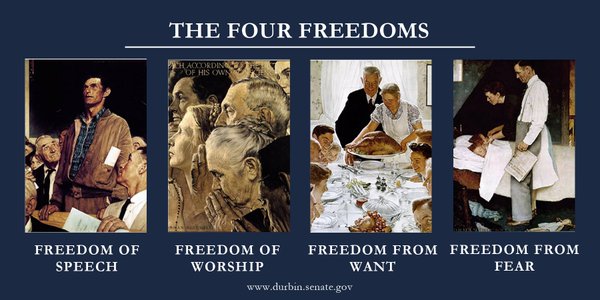