One of the great contributors to the divide we’re currently witnessing in politics is religion. As we’ve seen repeatedly, white evangelical nostalgia voters are the backbone of Trump’s base of support. They have crafted a narrative in which their faith is under siege by liberals and have fortified their defenses by supporting the most amoral man to ever occupy in the White House.

In that context, David French assumes he’s stumbled onto something important in an article titled “The Democrat’s God Gap.” He relies on polling conducted by Pew Research. 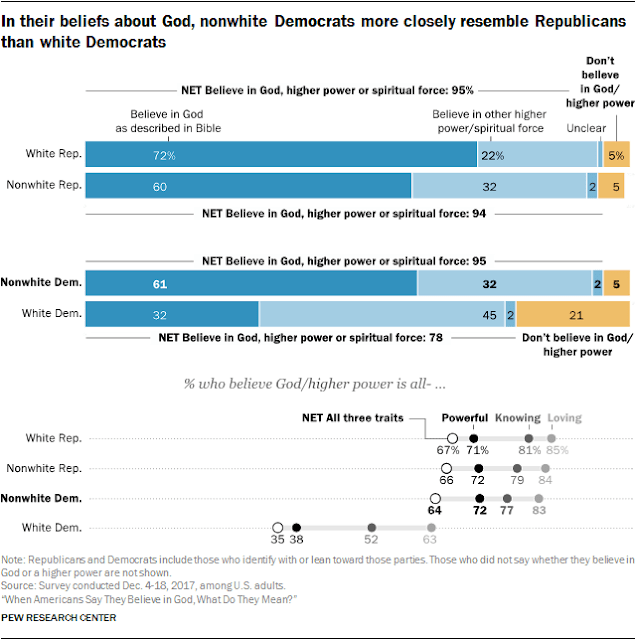 He also relies on two recent events that have become the backbone of arguments that Christians are under attack by so-called “elite liberals.” It’s interesting that in searching for an example, so many people have had to resort to an episode of Silicon Valley on HBO which portrays a character who is more reviled for being a Christian than being gay. It’s almost as if they can’t come up with an example of how that happens in real life.

The other event religious conservatives have zeroed in on is an article about Chic-fil-A by Dan Piepenbring. It’s true that he begins by talking about how their CEO Dan Cathy has financially supported homophobic causes. But they all seem to miss that this is the heart of Piepenbring’s critique:

[Chick-fil-A’s] arrival in the city augurs worse than a load of manure on the F train. According to a report by the Center for an Urban Future, the number of chain restaurants in New York has doubled since 2008, crowding out diners and greasy spoons for whom the rent is too dear. Chick-fil-A, meanwhile, is set to become the third-largest fast-food chain in the nation, behind only McDonald’s and Starbucks. No matter how well such restaurants integrate into the “community,” they still venerate a deadening uniformity. Homogeneous food is comfort food, and chains know that their primary appeal is palliative. With ad after ad, and storefront after storefront, they have the resources to show that they’ve always been here for us, and recent trends indicate that we prefer them over anything new or untested.

I suppose that one could make an argument that it is elitist to suggest that fast-food chain restaurants “venerate a deadening uniformity,” but that hardly constitutes an attack on religion.

Let’s go back to the fact that Chic-fil-A’s CEO is a major contributor to anti-gay efforts. That is really the crux of the divide. I would propose that liberals don’t really care that Dan Cathy is a Christian, just as it’s not an issue with the owners of Hobby Lobby. I’m sure there are thousands of companies whose owners/CEO’s are devout Christians (I know about a lot of them), but no one pays any attention to their private beliefs. It is when those companies enter into the arena of civil rights and politics that they become a target. Liberals also aren’t suggesting that owners/CEO’s can’t get into politics. It’s just that when they do, there are likely to be consequences from people who disagree with them. That is how politics works.

All of that brings us back to the chart up above from Pew Research. David French can talk about a “God divide” in the Democratic Party, but diversity of religious beliefs is something that has been going on for decades. Whether or not someone on the left believes in God has never been an issue. Protestants, Catholics, Muslims, Jews, atheists and agnostics have been able to co-exist because no one is attempting to subjugate one religion beneath another or force non-believers to comply with their religious beliefs. That isn’t simply a standard for the Democratic Party, it is the foundation on which this country was built.

On the other hand, as Dr. Mark Labberton, president of Fuller Theological Seminary recently said, white evangelical Republicans are the ones in crisis when it comes to politics.

An evangelical dance with political power has been going on from the time of Billy Graham, through the Moral Majority and the religious right, to the Tea Party, and most recently with the white evangelical vote…

This points to an evangelical crisis over so many issues of power: racial, political, economic, cultural, right against left, Republican against Democrat, rich against poor, white against black, men against women, and so on…The apparent evangelical alignment with the use of power that seeks dominance, control, supremacy, and victory over compassion and justice associates Jesus with the strategies of Caesar, not with the good news of the gospel.

I would suggest that the evangelical alignment with that kind of power is not only at odds with the gospel, but with the very religious tolerance for people of all faiths and no faith on which this country was founded. African American Christians seem to understand that more deeply than their white counterparts. In the Trump era, Muslims and the great majority of Catholic Latinos are learning the lesson as well. To the extent that religious liberty is about having the freedom to practice the religion of your choice (or no religion at all) rather than the ability to tell other people what to do/believe, the so-called “God gap” is what this country has always aspired to be, and Democrats should celebrate it rather than allow it to be cast as a problem.