Last week a federal judge in San Diego gave the Trump administration a deadline to reunite the families they had separated at the border. For children under 5 years old, they have until Tuesday and for those older, until July 26. The reason the judge issued such a short time frame was because two days before that hearing, the administration released a statement.

The Trump administration says it has a “well-established” plan in place to reunite families separated as a result of the president’s controversial zero-tolerance immigration policy, but there’s still no word on when the reunifications would be complete…

DHS and Health and Human Services “have a process established to ensure that family members know the location of their children and have regular communication after separation to ensure that those adults who are subject to removal are reunited with their children for the purposes of removal,” DHS said in the statement. “The United States government knows the location of all children in its custody and is working to reunite them with their families.”

We now know that was a baldfaced lie.

The family separations, part of an aggressive effort by the Trump administration to deter illegal immigration, have produced a chaotic scramble as officials now face political and judicial pressure to reunite families.

Records linking children to their parents have disappeared, and in some cases have been destroyed, according to two officials of the Department of Homeland Security, leaving the authorities struggling to identify connections between family members.

When the children were initially separated from their parents, they were in the custody of Customs and Border Protection for the first 72 hours. Apparently when they were turned over to the Office of Refugee Resettlement (part of the Department of Health and Human Services), identifying information about the fact that they had arrived with their parents was eliminated from their records. They were then sent all over the country to be housed with children who had crossed the border unaccompanied by their parents.

The agency [DHS] said it needed to read through original documents of all children in federal custody “to screen whether children in our facilities were separated from parents.” That involved scrubbing the documents of an estimated 12,000 children to determine which had been separated from their parents by the authorities, as opposed to arriving in the country without a parent or other relative.

Our government has now issued a call for volunteers to scan through those original documents to determine which children need to be reunited with their parents. They actually don’t know. That’s why Dara Lind emphasized this point:

Going to say this one more time:

If you're running with the stat "there are 3,000 separated kids in gov custody," you're a) not really correct and b) missing the point that they do not actually know exactly which kids in custody were taken from parents! https://t.co/Nz2FUGV4ir

In other words, DHS doesn’t know how many of these children they have in custody because they don’t know who they are or where they are. Today, they asked the judge for more time because…get this…they want to ensure that any release of a child from government custody occurs in a manner that ensures the safety of the child. Oh, so after they have ripped these children away from their parents, this judge is supposed to believe that the delay is about their concern for the safety of the children? Goddess help us all! As Adam Serwer noted on Twitter, “Some of these families will turn out to have been permanently destroyed.”

Remember, these are the same people who, less that two weeks ago, told us that they had a “well-established” plan in place to reunite families separated as a result of the president’s zero-tolerance immigration policy. How can anyone ever believe anything that this administration says?

Words fail me in light of this pairing of cruelty with incompetence and dishonesty. Since I wrote earlier today about the Statue of Liberty, this pretty much captures how I’m feeling about my country right now. 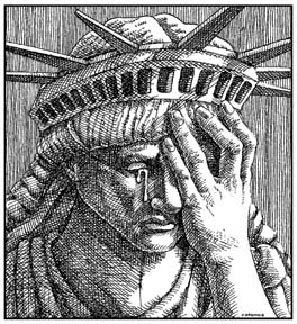