This is the most important thing that Speaker Nancy Pelosi said Tuesday night in response to Trump’s Oval Office speech:

"The fact is, the women and children at the border are not a security threat. They're a humanitarian challenge."

The reason I want to highlight those words is because everything this president has said about the refugees at our southern border is a lie and, as Dara Lind documented, the intent of those lies has always been to spread fear that ‘immigrants are coming across the border to kill you.”

We need to be clear about the fact that this whole fake crisis Trump is promoting stems from his own racism and is aimed at exploiting the racist fears of his supporters. The people he wants us to fear are those who come from what he previously called “shithole countries.” As a reminder, here is the context of those remarks:

President Trump grew frustrated with lawmakers Thursday in the Oval Office when they discussed protecting immigrants from Haiti, El Salvador and African countries as part of a bipartisan immigration deal, according to several people briefed on the meeting.

“Why are we having all these people from shithole countries come here?” Trump said, according to these people, referring to countries mentioned by the lawmakers.

Trump then suggested that the United States should instead bring more people from countries such as Norway, whose prime minister he met with Wednesday.

Trump would be fine with more white immigrants from countries like Norway. It is the brown and black immigrants he despises and wants us to fear.

On Wednesday, Donald Trump, Jr., posted something on Instagram that makes the racism underlying this whole confrontation over a border wall more overt. 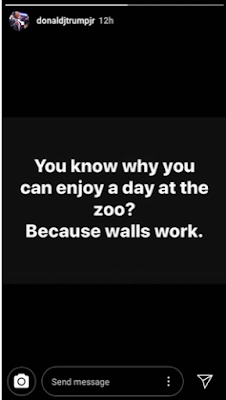 The president’s son justified his father’s position by comparing refugees to zoo animals. On the one hand, there is a way in which Don, Jr. simply said the quiet parts out loud. We all know that this is the attitude he and his father share about black and brown people. But it is still painful to realize that the president’s son thinks it is acceptable to post something like this publicly. Let’s never forget what happens when a deplorable human being and his family occupy the White House.

This week, a federal judge slammed Bill Barr over the Mueller investigation. Hopefully, Merrick Garland’s Justice Department will stay on Barr and give financial crimes the attention they deserve.