Back in 2012, Jeb Bush made a prediction that shocked a lot of people during an interview with Joe Hagan.

Sitting down across from me, he assumes his role as party Cassandra, warning of the day when the Republicans’ failure to tap an exploding Hispanic population will cripple its chances at reclaiming power—starting in Texas, the family seat of the House of Bush.

“It’s a math question,” he tells me. “Four years from now, Texas is going to be a so-called blue state. Imagine Texas as a blue state, how hard it would be to carry the presidency or gain control of the Senate.”

Bush was wrong in terms of the timing. It is now seven years later and the most anyone can say about Texas is that it could be headed towards becoming a purple (i.e., swing) state. That is often credited to the fact that, as Bush suggested, the exploding Hispanic population has made Texas one of five states in the country where non-Hispanic whites make up a minority of the population. The others on the list—Hawaii, California, New Mexico, and Nevada—are all pretty blue at this point. So it is fair to question whether or not it’s just a matter of time before Texas joins them.

But there is another factor that is working to turn Texas blue, and it goes directly to what Daniel Block wrote about in the most recent edition of the Washington Monthly. His premise, although focused on so-called “heartland cities,” is that growing metro areas are key to combatting Republicans’ increasingly strong support in exurban and rural areas of red states.

According to Census Bureau data, four areas in Texas—Dallas-Fort Worth, Houston, Austin, and San Antonio—are among the top 15 fastest growing metros in the country, with DFW and Houston holding the number one and two slots. The political impact of that growth is demonstrated by this chart. 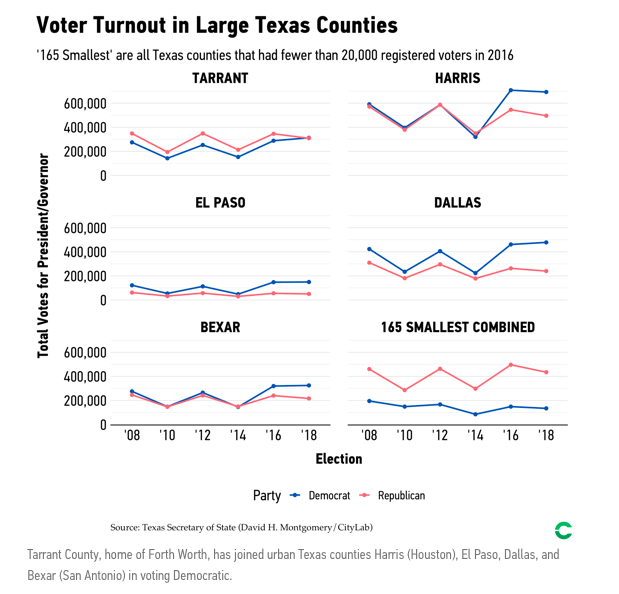 Accounting for the fluctuation between presidential and midterm elections, the number of Republican votes has held steady, while the Democratic share of the vote has risen sharply in every major urban area since they were basically on par back in 2014. That’s what made the news about Tarrant County such a major story in the 2018 midterms (emphasis mine).

“Fort Worth is one of the largest conservatively led cities around,” Mayor Betsy Price told me earlier this year. It’s true: Not only is she President Donald Trump’s favorite mayor, Price is one of just a handful of GOP leaders who presides over a large urban center, along with the mayors of Jacksonville and Oklahoma City…

Both incumbent Senator Ted Cruz and challenger Robert “Beto” O’Rourke needed passionate voters to turn out in huge numbers in Tarrant County to settle one of the country’s most divisive races. In the end, O’Rourke failed to unseat Cruz. But the contest was far too close for comfort for the GOP in Texas, and Beto won Tarrant County—where voters haven’t sent a Democrat to Congress in decades.

So did Democrat Beverly Powell, who picked up the state Senate seat for the Fort Worth area. Closer to the ground, Devan Allen, a Democratic candidate for the Tarrant County Commission, managed to upend Republican incumbent Andy Nguyen in a close contest. Texas didn’t witness a blue wave, exactly. But liberal voters have stormed the last conservative urban stronghold in Texas.

As Republicans continue to lose their grip on urban areas in Texas, the question is whether that will be enough to offset their strength in the rest of the state. If so, imagine what adding almost 40 votes to the blue column does to the electoral college. The impact on the Senate would be less severe, with only two senate seats at stake.

Jeb Bush’s prediction was off in terms of timing and he didn’t account for the fact that major metropolitan areas in Texas would lead the country in terms of growth, but he was right to suggest that it is time to start imagining what happens when or if the state turns blue.