In the 1960s, Democratic President Lyndon Johnson declared a war on poverty. But after programs like Medicare, Medicaid, Food Stamps, and Head Start reduced the poverty rate in this country from 22 to 13 percent, most Democrats quit talking about the issue.

That is most likely a result of the Republican Southern Strategy, which convinced a lot of white voters that anti-poverty programs were designed to help “those people” in urban America. Combined with President Reagan’s suggestion that government was the problem, not the solution, Democrats began to focus their appeals on helping those in the broader middle class.

When it comes to poverty, there have been some major developments over the last couple of decades. As Elizabeth Kneebone documented, the biggest change has been the number of people in the suburbs who are living in poverty. 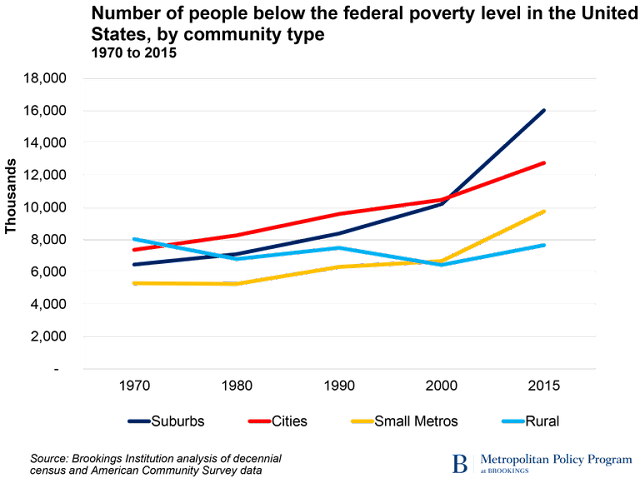 The first thing to note about this change is that, with all of the discussion about Democrats increasing their appeal in the suburbs, perhaps it is not all a result of wealthy, white, college-educated women being repulsed by Donald Trump. There is also the possibility that, as suburbs become home to more people living in poverty, Democratic party principles resonate more with their residents .

All of that suggests that it might be a good time for Democrats to start talking more directly about proposals to address poverty. Dylan Matthews documents that several of the potential contenders in the 2020 presidential primaries are doing just that. He draws on research from Columbia University’s Center on Poverty and Social Policy to analyze 5 proposals from Democrats to combat poverty. Two of them are expansions of the Earned Income Tax Credit (EITC).

The GAIN (Grow American Incomes Now) Act ($111 billion a year) by Sherrod Brown and Ro Khanna would double or triple the EITC’s benefits, depending on family size, and increase the maximum income for families to receive the credit from the mid-$40,000 range to as high as $75,000.

The Rent Relief Act ($93 billion a year), also by Harris, would offer a refundable tax credit to people making $100,000 or less and spending at least 30 percent of their income on rent. The credit would be worth a certain percentage of the difference between their rent (capped at 150 percent of area fair market rent) and 30 percent of their income. For the poorest renters, the credit would cover the full difference; for slightly less poor renters, 75 percent, and so on.

The HOME (Housing, Opportunity, Mobility, and Equity) Act ($134 billion a year) by Booker would, like the Harris bill, provide a refundable credit to people paying more than 30 percent of their income in rent. The credit would be worth the difference between their year’s rent (capped at the area fair-market rent) and 30 percent of their income. Unlike the Harris bill, there’s no strict income requirement, though the fair market rent requirement prevents the credit from going to luxury renters.

Finally, one bill provides families with a cash allowance for each child they are raising.

The American Family Act ($91 billion a year), by Sherrod Brown and fellow potential candidate Michael Bennet, would provide $3,000 a year for kids 6 to 18, and $3,600 per year for kids 0 to 5, paid out monthly to everyone earning under $75,000 (single parents) or $110,000 (couples), after which the credit would phase out. The version of the bill set to be introduced in Congress will feature higher phaseout thresholds, the Columbia team (which is in touch with the staff drafting it) says, so the Columbia researchers modeled it with phaseouts at $130,000 for single parents and $180,000 for couples.

According to the research, the proposals that would have the most impact on reducing poverty are Booker’s HOME program and Harris’s LIFT program. The Bennet-Brown AFA program would have the biggest effect on reducing child poverty. Since each program comes with a different price tag, the researches found that, if they all cost the same, Booker’s HOME program provided the best bang for the buck. As Matthews notes, those differences are related to the program’s overall goals.

Harris’s LIFT Act and Brown and Khanna’s GAIN Act, for instance, are meant to make work more lucrative for low- and middle-income families who aren’t necessarily poor. The Bennet-Brown child benefit is meant to go to even upper-middle-class families and defray child care expenses. The rental assistance bills are, first and foremost, housing policy.

Because housing and utilities make up the largest share of total basic needs expenses for most families, it stands to reason that the rental assistance bills have the greatest impact on poverty.

The good news is that there are two candidates who are currently in the 2020 race and two more potential candidates who have proposed serious policies aimed at reducing poverty. These are the kinds of programs that need to be placed side-by-side with proposals to increase taxes on the wealthy. In order to address income inequality, a critical first step is to lift up those on the bottom.

After threatening to break the debt ceiling, GOP senators are whining. Boo-hoo.