Donald Trump has come up with a new line that he is using both on Twitter and in his public appearances. He keeps repeating that our country is full.

….Mexico must apprehend all illegals and not let them make the long march up to the United States, or we will have no other choice than to Close the Border and/or institute Tariffs. Our Country is FULL!

Of course that’s a lie, and the president’s own immigration policies prove that he knows it’s a lie.

As President Trump threatened to shut down the U.S.-Mexico border in recent days, his Department of Homeland Security nearly doubled the number of temporary guest worker visas available this summer.

The Homeland Security and Labor departments plan to grant an additional 30,000 H-2B visas this summer on top of the 33,000 they had already planned to give out, the agencies confirmed.

The H-2B visa allows foreign workers to come to the United States legally and work for several months at companies such as landscapers, amusement parks or hotels. About 80 percent of these visas went to people from Mexico and Central America last year, government data shows.

The reason the Trump administration is doubling the number of temporary worker visas is because this country is actually experiencing a significant labor shortage.

The Economic Innovation Group (EIG)—a think take developed in 2015 by a number of high-profile tech entrepreneurs—recently released a study which suggests that the country’s biggest economic challenge could be demographic decline. One of the most striking visuals was this map of changes to the working age population over the last 10 years. 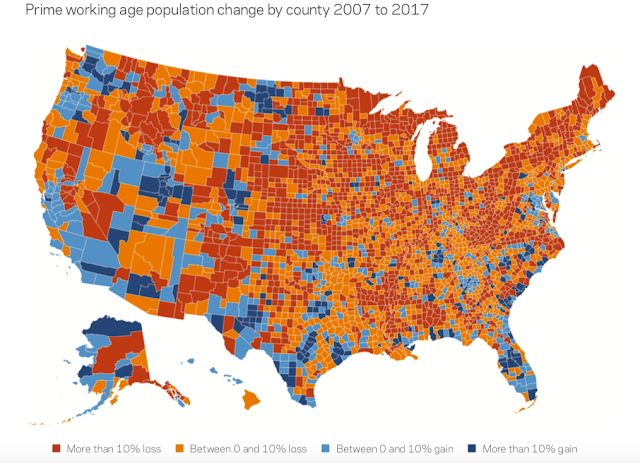 Here are some of EIG’s major findings:

Writing about this report, Neil Irwin noted the downward spiral that can take hold in areas that experience population loss.

A shrinking supply of working-age people can prompt employers to look elsewhere to expand, making it harder for local governments to raise enough taxes to pay for infrastructure and education, and encouraging those younger people who remain to head elsewhere for more opportunity.

As the map above demonstrates, this problem is particularly acute in what is commonly referred to as the “heartland.” What is most notable is the way that map resembles the results of the 2016 election by county.

Areas of the country that are thriving because they are exempt from the downward spiral of population loss tend to be those that support Democrats. That is why Daniel Block recently wrote about how the monopolization of our economy drives population growth to large coastal metropolitan areas, leaving the heartland behind.

According to William Frey at Brookings, that trend might be mitigated as the economy continues to recover from the Great Recession (emphasis mine).

Newly released census data for the first seven years of this decade signal a resumption of the population dispersal that was put “on hold” for a good part of the post-Great Recession period. The Census Bureau’s annual county and metropolitan area estimates through 2017 reveal a revival of suburbanization and movement to rural areas along with Snow Belt-to-Sun Belt population shifts. In addition, the data show a new dispersal to large- and moderate-sized metro areas in the middle of the country—especially in the Northeast and Midwest. If these shifts continue, they could call into question the sharp clustering of the nation’s population—in large metropolitan areas and their cities—that characterized the first half of the 2010s.

The map also shows growth in the working age population in areas where immigrants are concentrated (California, Texas, Colorado, Nevada, and Florida). All of this suggests that, contrary to Trump’s lies, the county isn’t full and immigration could be the answer to combat one of the biggest economic challenges we face.

In Kentucky, a new GOP-driven law denies the (Democratic) governor the ability to fill vacant Senate seats and gives it to party apparatchiks. A classic Mitch power play, it flouts the Constitution.

It's yet another reason to expand the high court.

Mitt Romney and a group of 10 GOP senators have a plan. The White House can learn from the Harvard Negotiation Project about how to respond.