Some Democrats don’t want to hear poll numbers that favor their party in the 2020 election because they assume that being in an underdog position is more motivating for prospective voters. I suspect that they are also overcompensating a bit for the shock we all felt when Trump was elected in 2016.

But it is interesting to note that Republicans take the exact opposite approach and will do almost anything to avoid bad poll numbers. In the lead-up to the 2012 election, we saw them suggest that the polls were skewed, while one pundit eschewed them altogether, preferring to count lawn signs. More recently Trump fired his pollsters for bringing him bad news.

In the meantime, it appears that Trump and his supporters have come up with an alternative to polls: crowd size at rallies. We heard inklings about this in 2016 from both the Trump and Sanders campaign. They touted the fact that they were able to draw much larger crowds than Clinton—assuming that meant that they enjoyed greater support from the electorate.

Since his election, Trump has reveled in the size of the crowds that attend his campaign-style rallies. For someone who thrives on adoration, he assumes that seeing a lot of people fawn over him indicates that the whole country (or at least those who matter) loves him.

If you don’t tune in to hear what Trump supporters are saying, you might not know that they are starting to become obsessed with the size of the crowds at his rallies. Things like this pop up on their Facebook feeds regularly. 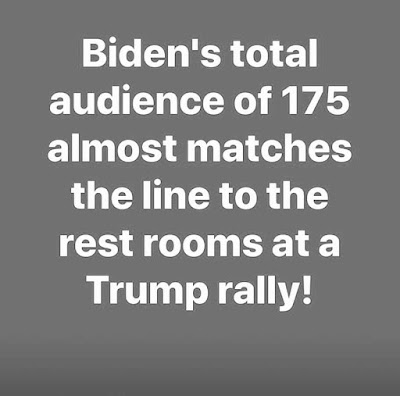 The Daily Caller even sent out a reporter to a Democratic event to “trigger the libs” about crowd size.

Only a couple hundred people showed up to see 9 Democratic candidates– Compare that to @realDonaldTrump 's massive 2020 re-election campaign rally in Florida.

If Trump were leading in the polls right now, we wouldn’t be hearing so much about crowd sizes. Instead, we’d be hearing endlessly about how Trump was wiping the floor with the opposition. In other words, Republicans don’t share the idea that being in the underdog position is preferable and will do just about anything to paint themselves as “winners,” no matter how badly they’re losing.

I suspect that this difference represents a larger distinction between liberals and conservatives that would be ripe for deeper analysis. Both of them represent an attempt to reach around the data to motivate voters emotionally. Democrats assume that facing a challenge is motivating, while Republicans think that voters are drawn to the side that is dominating the competition.

Republican candidate Glenn Youngkin was raised on official, state-taught racism. I should know. So was I.

If House progressives drop their opposition, Biden will sign it quickly. That may save the Virginia governorship for the Democrats.