In the ten years after I graduated from college, I moved ten times. Sometimes that meant going across town, and several times it meant moving across country to states as distant from each other as Texas, Colorado, California, and Minnesota.

Compared to other young people at that age, my experience might be a bit extreme. But the facts are that most young people are quite mobile, which, as Charlotte Hill and Jacob Grumbach explain, makes them less likely to register and vote.

One of many reasons for the lack of registration is that young adults change addresses more than twice as often as people over 30, and with each relocation comes the need to register anew. Political scientists have described it as “the key stumbling block in the trip to the polls.” There’s also the risk of being “too” registered: Simultaneous registrations in two places has led to countless young people being purged from voting rolls without notice, according to an analysis by the Brennan Center for Justice at New York University.

The simple solution proposed by Hill and Grumbach is for states to allow residents to register on the same day that they vote. Their research indicates that doing so would increase turnout among 18-24 year olds by as much as 10 percent.

My home state of Minnesota was the second in the country to allow same-day registration back in 1974. In the 2012 election, about 18 percent of Minnesota voters—or 527,867 people—registered at their polling location. Hill and Grumbach document that in Michigan, which recently passed same-day voter registration, it would have made all the difference in 2016. 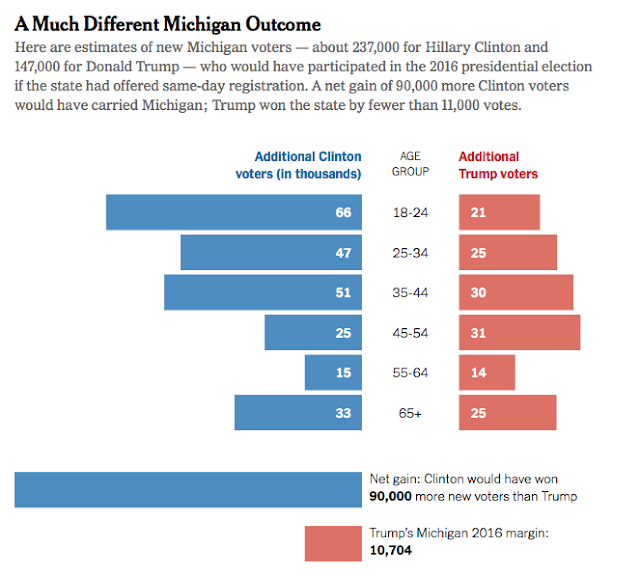 If this country wanted to maximize voter engagement, there are several reforms that would be under consideration, like vote by mail, making election day a federal holiday, and extended early voting. But it all starts with getting more citizens registered. A simple way to do that is to allow them to register at the polls. That would eliminate the barrier to voting identified most often by young people.