Seven years ago at the 2012 Democratic Convention, Michelle Obama spoke about the values she and Barack learned from the example set by their parents. What she had to say back then seems almost prophetic today.

Michelle referenced things that most Americans assumed were common values, including things like dignity, decency, hard work, helping others, honesty, integrity, gratitude, humility, and respect. She ended with the famous line: “Being president doesn’t change who you are, it reveals who you are.”

What has been the hardest part of the Trump presidency for me is to watch so many Americans support a man who demonstrates the opposite of those values on a daily basis. The presidency didn’t make Donald Trump a lying, racist bully. It is revealing who he’s always been. And as the pressures against him mount, he’s simply getting worse.

When it comes to the lies, the Washington Post fact checkers recently summarized what is happening.

President Trump’s proclivity for spouting exaggerated numbers, unwarranted boasts and outright falsehoods has continued at a remarkable pace. As of Aug. 5, his 928th day in office, he had made 12,019 false or misleading claims, according to the Fact Checker’s database that analyzes, categorizes and tracks every suspect statement the president has uttered.

Trump crossed the 10,000 mark on April 26, and he has been averaging about 20 fishy claims a day since then. From the start of his presidency, he has averaged about 13 such claims a day.

What subject does Trump lie about most often? The answer is that “about one-fifth of these claims are about immigration, his signature issue.” Back in 2018, I noted that the president’s immigration policies were based on four big lies.

According to polling by the conservative group Heritage Action for America, none of those lies are resonating with voters, not even Republicans. 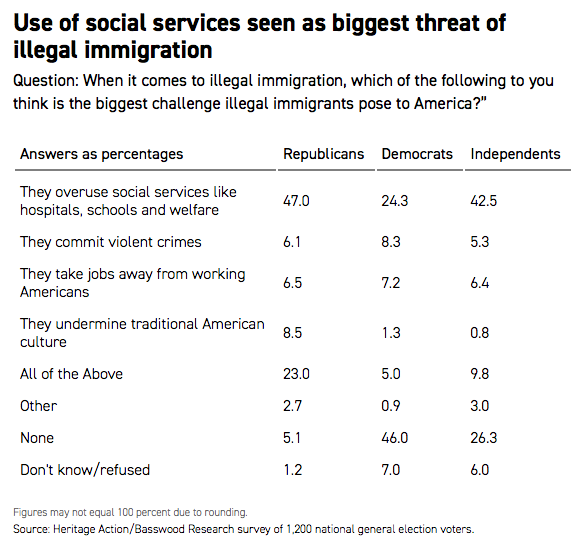 On the one hand, 83 percent of Republican voters said that “illegal immigration affects my life,” including strong majorities of working-class and suburban voters. Yet when asked what they considered to be illegal immigration’s biggest consequence, the most common answer wasn’t violence, job losses or cultural change; more than half said overuse of social services.

That helps explain why the Trump administration just released a new rule that affects legal immigrants.

Beginning in October, a new rule will make immigrants who use certain government safety-net programs ineligible for permanent residency, blocking their path to naturalized citizenship. The move, which is likely to be challenged in court, meshes with the administration’s other efforts to fundamentally change the nature of U.S. immigration from a focus on family reunification to one based on English proficiency, educational level and work experience.

Like all of this president’s immigration policies, this one is based on lies. Here are the facts.

–  Legal Permanent Residents (LPR’s)–sometimes referred to as green card holders–do not have full access to all public benefit programs and are subject to limitations before being eligible for federal means-tested benefits…such limitations include the “five-year bar,” which requires the individual to have maintained LPR status in the U.S. for five years before being eligible for benefits…

To the extent that Trump’s base supports these kinds of policies due to racism, they won’t be interested in facts, because the lies simply confirm what they want to believe about immigrants. That is precisely what Trump and his enablers are counting on. They are using the lies to challenge American values rather drastically.

Here's acting USCIS director Ken Cuccinelli saying on NPR this morning that the Statue of Liberty plaque should be changed to read, "give me your tired and your poor who can stand on their own two feet, and who will not become a public charge." pic.twitter.com/q8OoNn3k6r

But if there are those among the ranks of the 40-plus percent of Republicans and Independents who have simply swallowed the lies and think that the biggest challenge immigrants pose to America is actually that they overuse social services, perhaps the truth could prevail. Was Michelle Obama right to suggest that we share some common values like decency, honesty, helping others, and respect?