During the 2016 election, it wasn’t just Russia that launched a disinformation campaign against Hillary Clinton in order to influence the election. Homegrown conspiracy theorists made their own contributions that allowed Trump to spread the meme about “Corrupt Hillary.”

The Berkman Klein Center at Harvard documented those efforts and the complicity of mainstream media last spring with a report titled, “Partisanship, Propaganda and Disinformation: Online Media and the 2016 Presidential Election.” One of the most revealing aspects of their investigation came from this chart showing what the media covered in the run-up to the 2016 election. 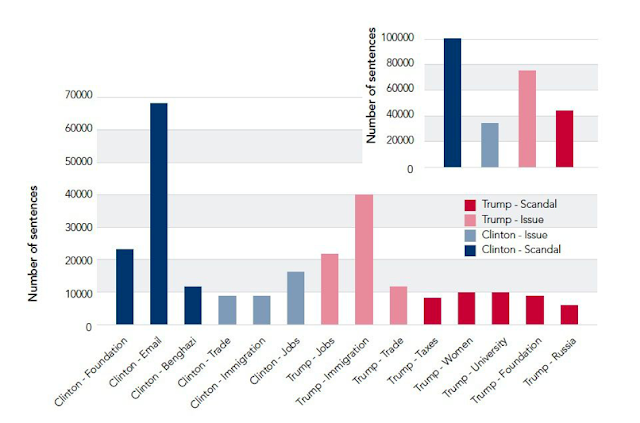 What we see is that, when it came to Donald Trump, the media focused on the issues he was talking about (primarily immigration). But with Hillary Clinton, it was all about supposed “scandals.”

While it is true that the former secretary of state’s emails garnered the most attention thanks to James Comey, the Berkman Klein Center devoted an entire section of their report to an exposé titled, “Dynamics of Network Propaganda: Clinton Foundation Case Study.” They documented how the false allegations in Peter Schweizer’s book, Clinton Cash, were legitimated, not just by right-wing media, but by the New York Times and later by major outlets like the Associated Press and the Washington Post.

Even after Trump won the election, he and his enablers in right-wing media wouldn’t let the story go. In an obvious attempt to win the president’s favor after recusing himself from the Russia investigation, former Attorney General Jeff Sessions appointed U.S. Attorney John Huber to look into the allegations about the Clinton Foundation.

A Justice Department inquiry launched more than two years ago to mollify conservatives clamoring for more investigations of Hillary Clinton has effectively ended with no tangible results, and current and former law enforcement officials said they never expected the effort to produce much of anything.

John Huber, the U.S. attorney in Utah, was tapped in November 2017 by then-Attorney General Jeff Sessions to look intoconcerns raised by President Trump and his allies in Congress that the FBI had not fully pursued cases of possible corruption at the Clinton Foundation and during Clinton’s time as secretary of state, when the U.S. government decided not to block the sale of a company called Uranium One.

As a part of his review, Huber examined documents and conferred with federal law enforcement officials in Little Rock who were handling a meandering probe into the Clinton Foundation, people familiar with the matter said. Current and former officials said that Huber has largely finished and found nothing worth pursuing.

To anyone who has actually looked into the allegations, that comes as no surprise. But there is more to the story that comes later in the Post article. They state that Huber had reached this conclusion and ended his investigation by the time Mueller filed his report, which occurred last spring. So we have now gone at least nine months with no word on Clinton’s exoneration from the Justice Department. Perhaps that is because it wouldn’t simply be the conspiracy theorists who would have to eat a little crow.

Back in November 2017, when Sessions appointed Huber under pressure from the president to investigate Clinton, Peter Baker contacted several former attorneys general to ask them what they would do in similar circumstances. William Barr was the only one who responded (emphasis mine).

“There is nothing inherently wrong about a president calling for an investigation,” said William P. Barr, who ran the Justice Department under President George Bush. “Although an investigation shouldn’t be launched just because a president wants it, the ultimate question is whether the matter warrants investigation.”

Mr. Barr said he sees more basis for investigating the uranium deal than any supposed collusion between Mr. Trump and Russia. “To the extent it is not pursuing these matters, the department is abdicating its responsibility,” he said.

By that time, the claims that Hillary Clinton, as secretary of state, had engaged in pay-for-play with the family’s foundation—and specifically the so-called “uranium deal”—had been completely debunked. But the man who would become Trump’s next attorney general was still peddling the conspiracy theory. He is now hiding the fact that Clinton has been exonerated.

As Jennifer Rubin wrote, “Hillary Clinton is the most exonerated politician ever.” By my count, she has been cleared of four major attempts to smear her reputation: (1) Whitewater, (2) Benghazi, (3) emails, and (4) the Clinton Foundation. Regardless of what anyone thinks of her politics, the collusion between her opponents and mainstream media to defame her have been relentless, with little to no accountability for the lies.

Beyond getting the story wrong so many times, it is important for those who colluded to be held accountable because we are now witnessing the same group of people spread conspiracy theories about other Democrats. Peter Schweizer is the one who initiated the whole Biden/Burisma lie in his book, Secret Empires. Just in case Biden isn’t the Democratic nominee, he is about to publish a book this month titled, Profiles in Corruption, that will attempt to smear the rest of the 2020 presidential candidates.

Keep in mind that Schweizer is president of the Government Accountability Institute, which was founded by Steve Bannon and is funded by the Mercer family. He is also senior editor-at-large for Breitbart News. Jane Mayer summarizes what we learned about the Bannon-Schweizer method of collusion from Joshua Green’s book, Devil’s Bargain.

Bannon designed the [Government Accountability Institute] as a means of transmitting partisan dirt-digging to the mainstream media. He realized that, though mainstream reporters were suspicious of partisan opinion, they were open to damning facts about public figures, regardless of the sourcing. He set out, with Schweizer, to produce material that would generate mainstream coverage, and right-wing outrage.

While the Washington Post got the scoop on the fact that the Huber investigation produced nothing, neither the New York Times nor the Associated Press has produced their own story about Clinton’s exoneration (the NYT published an article by Reuters that was solely based on the Post article). That is especially troubling given that those outlets produced the most explosive stories that promoted the pay-for-play insinuations.

It is time for those mainstream media outlets to broadcast that Hillary Clinton has once again been exonerated of the false charges cooked up by her political opponents. Not only does she deserve to have her name cleared, we all need to know that the Bannon-Schweizer method of collusion isn’t going to influence the 2020 election the way it did in 2016.

After offering carrots, the president turns to sticks to get shots in arms.