Last week Bernie Sanders and Elizabeth Warren became embroiled in a rift about whether or not he told her that a woman couldn’t win the presidency. Supporters on both sides claimed that the other side had lied about the exchange. We can all leave the resolution about that particular exchange aside, but Sanders affirmed his position when he went on to suggest that being a woman is a “negative.”

There you have it: Sanders says that being a woman is a "negative." https://t.co/3Zim0Xjg0v

As a woman, that literally felt like a punch in the gut. To basically affirm that being a woman is a negative—in politics or any other endeavor—hits a sore spot that, for most of us, has been festering all of our lives. To hear it come from a liberal is both hurtful and enraging.

But I’d also like to focus on what Sanders said at the end of that clip. He talked about the importance of looking at the totality of a candidate’s record. That is actually good advice. It is too bad that he isn’t doing that in his recent attacks against Joe Biden.

For example, the Sanders campaign sent out an edited transcript of something Biden said about Social Security, claiming that he agreed with former Republican Speaker Paul Ryan. Politifact rated that statement false. Here is the part of the speech they left out.

Now, I don’t know a whole lot of people in the top one-tenth of 1 percent or the top 1 percent who are relying on Social Security when they retire. I don’t know a lot of them. Maybe you guys do. So we need a pro-growth, progressive tax code that treats workers as job creators, as well, not just investors; that gets rid of unprotective loopholes like stepped-up basis; and it raises enough revenue to make sure that the Social Security and Medicare can stay, it still needs adjustments, but can stay; and pay for the things we all acknowledge will grow the country.

Since the campaign got caught in that lie, Sanders supporters have attempted to claim that Biden has been advocating for cutting Social Security for 40 years. As is often the case with disinformation, that is based on a half-truth. To solve a budget impasse in 1995, Biden supported a freeze on all federal spending, including cost of living adjustments to Social Security. Then there was his support for an Obama proposal to change the way cost of living increases were calculated, including both the income tax tables and Social Security. But the Sanders campaign turned those positions into an accusation that Biden attempted to “slash Social Security.”

An honest look at the totality of Biden’s position on Social Security would come from listening to Jared Bernstein, a progressive economist who served as an advisor to the former vice president.

Re this Biden/Sanders dust-up re Soc Security: When I worked for Biden, we often talked about its importance. He was/is as staunch a supporter as you'll find, both for econ & political reasons. “We should be increasing, not decreasing, Social Security!”https://t.co/rdjzshiT6o

In the end, Sanders could have honestly said that he disagreed with Biden’s positions in the past about how cost of living increases are calculated for Social Security. While that would have had the benefit of being true, it doesn’t have the same punch as accusing Biden of wanting to “slash Social Security.” So instead, he’s gone with the latter and a disinformation campaign.

Meanwhile, the Sanders campaign seems to be in a bit of disarray about how negative to go against Biden. They put out an email blast lauding an op-ed by a surrogate, Zephyr Teachout, titled. “‘Middle Class’ Joe Biden has a corruption problem—it makes him a weak candidate.” The email blast was written by Sanders’ speechwriter, David Sirota, who also tweeted the article. 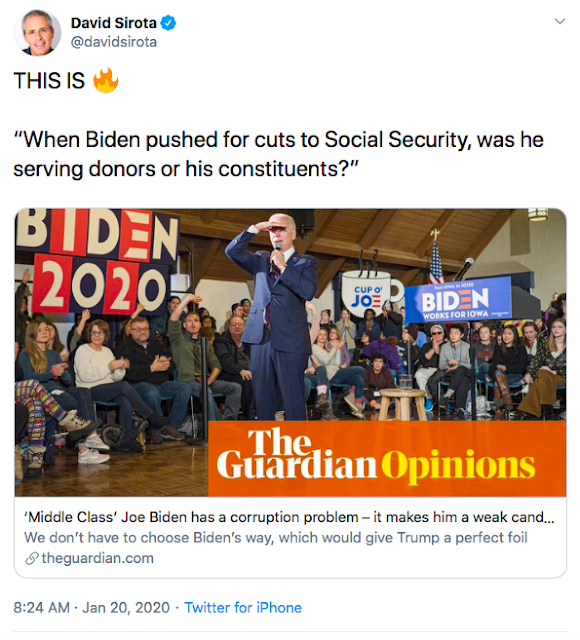 The reaction was immediate and overwhelming.

There are a lot of legitimate issues to debate in 2020. But the only two campaigns ever to call @Joebiden “corrupt” are Trump and Sanders.

What does that tell you? https://t.co/tzp3wnzpZD

This is garbage from the Sanders campaign. Disagree on policy all you want, but this is a ludicrous argument about someone who has spent his life fighting for Democratic values. https://t.co/6nMbHQUy5w

By Monday night, Sanders had apologized.

Senator Bernie Sanders apologized to former Vice President Joe Biden on Monday for an op-ed written by one of his campaign surrogates that claimed Biden has a “big corruption problem.”

“It is absolutely not my view that Joe is corrupt in any way. And I’m sorry that that op-ed appeared,” Sanders told CBS News.

The senator is to be commended for being willing to apologize. But the issue wasn’t the op-ed by Teachout. It is common for a candidate to have to distance themselves from something one of their surrogates said. The issue is that a high level staff person in the Sanders campaign promoted the article, indicating that it had been endorsed by the candidate.

Some of us spoke up when Sanders hired David Sirota because his modus operandi was obvious to anyone who knew his history. Sirota has a reputation of being a ruthless attack dog. The campaign had to know that when they hired him. But now it seems that Sirota went too far with his attacks and his boss has been forced to apologize.

It is clear that the Sanders campaign will rely on attacks against his opponents. But this latest incident demonstrates that they are still struggling with where the boundaries are for those negative attacks. It is good to know that, at least for the candidate himself, accusing Biden of being corrupt is outside the boundary.