By now, most of us have heard about QAnon, the group of conspiracy theorists that formed soon after Donald Trump was elected. For a refresher course, here’s how they were described by Travis View, the host of the QAnon Anonymous podcast, who has written about the group extensively for the Washington Post.

“Now, Donald Trump in this conspiracy theory knows all about this evil cabal’s wrongdoing. But one of the reasons that Donald Trump was elected was to put an end to them, basically. And now we would be ignorant of this behind-the-scenes battle of Donald Trump and the U.S. military — that everyone backs him and the evil cabal — were it not for ‘Q.’ And what ‘Q’ is — is basically a poster on 4chan, who later moved to 8chan, who reveals details about this secret behind-the-scenes battle, and also secrets about what the cabal is doing and also the mass sort of upcoming arrest events through these posts.”

“Q” doesn’t directly tell his followers what’s going on. Instead, he provides hints around which they develop their conspiracy theories. But when it comes to coronavirus, “Q” has apparently been silent, which has left his followers scrambling. As a result, several theories about the virus have emerged.

Because these folks have believed in a cabal that controls everything for so long, it is inevitable that they would spread things like this—even though it directly contradicts all of their other conspiracy theories. 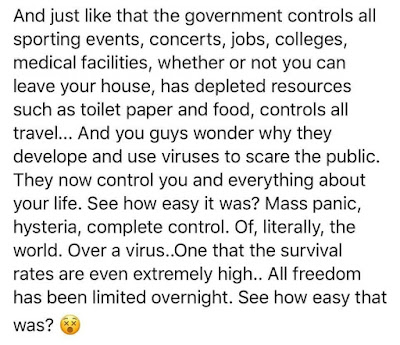 Of course, QAnoners buy into the whole idea that coronavirus is a hoax.

After all the left’s hoaxes failed, they have launched the most epic Trojan horse fake news HOAX in the history of America. It’s even worse than war of the worlds. These crazy people are running around like chickens with their heads cut off screaming that the sky is falling and bringing the economy to its knees over nothing but a flu! A FLU! And Americans have actually fallen for it!!

I hope you’re not one of the lost lemmings who have been brainwashed and bamboozled by the left. If you are, turn back and reject their lies. Turn to the book of Truth and don’t take your eyes off of it.  Ever.

Here’s a meme that captures a couple of their themes. 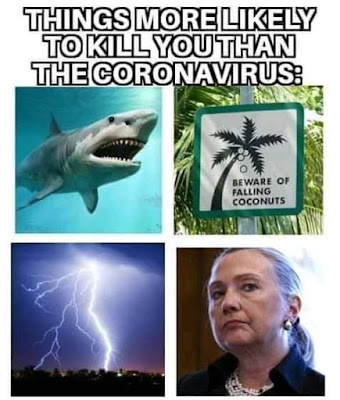 There is one theory, however, that is rising to the top of this heap of nonsense. In order to understand this one, it is important to know that for months now, they have been predicting that “the storm” is coming.

“‘The Storm’ is basically when tens of thousands of people, including Hillary Clinton and James Comey, and [John] Brennan, and maybe even Hollywood celebrities, and other high-level politicians and journalists even, are going to be arrested, and rounded up and possibly even sent to Guantanamo Bay…Or be subjected to basically military tribunals, where they will be tried for their heinous crimes.”

According to the QAnon crowd, “social distancing” is just a cover for the coming storm.

This means mass arrests and we know this is going to happen worldwide, so they needed a cover to restrict travel and get people prepared to have an interruption in supplies while a financial reset and the arrests occur. President Trump is trying to tell Americans to be prepared under the guise of a pandemic.

The stock market needs to adjust down in order to do a complete reset and move us to a gold backed currency and get rid of the Fed. The stock market has been falsely inflated for awhile. The CV is the perfect “crisis” to make a lot of it work. Travel will likely shut down for a brief period and maybe all schools and universities will be shut down so kids are home safe with their parents when the arrests occur. We could even have a period of Marital Law to suppress opportunities for looting and riots…

Having the CV crisis allows POTUS to shut down our borders so Homeland Security and our military can focus on keeping peace. Also, POTUS said everything with the CV will be over in April. He said it because he knows it is fake and they plan to take action in March and by April, the American public will be informed of what has occurred and why.

When Tom Hanks announced that he had contracted the virus, it was proof to the QAnoners that the storm was underway. The story simply gets more bizarre from there.

Many QAnon promoters are speculating that the COVID-19 pandemic is a "cover story" for "the storm" that is supposed to purge the world of bad people.

Some are aready saying that if a public figure dies from COVID-19, then that will just be a cover story for their suicide. pic.twitter.com/u6qMGVn1WE

The fact that folks like this are among Trump’s most avid followers tells you all you need to know about the man who currently occupies the White House. It will be a great day when he leaves the premises and we can go back to either ignoring or laughing at these idiots.