How American politics will be altered by the experience of a national pandemic is still an open question. Writing at the American Conservative, Robert Merry postulates that it will finally unleash a populist revolution.

The central reality of American politics today is the gulf between, on one hand, the nation’s elites and their primary constituency groups (minorities, academics, government employees, and well-off urban/suburbanites) and, on the other hand, that 55 percent of the electorate characterized by Walter Russell Mead as being motivated primarily by an abiding hostility to what Mead calls “the self-proclaimed expert class.”…

And now comes the coronavirus global pandemic. It’s difficult to imagine a more disruptive political force converging upon a more vulnerable status quo. We can’t know the full shape of what will emerge from the pandemic chaos…But we do know that America’s current political status quo isn’t likely to remain intact after the wave of adversity and difficulty that we’re likely to see as the COVID-19 pandemic runs its course through America and the world.

Staking out the opposite position is Jonathan Weiler.

On a basic personal level, most Americans, regardless of partisanship, now seem to grasp the seriousness of the crisis and their own role in mitigating it.

Stephen Colbert once famously said that reality has a well-known liberal bias. In a similar vein, at some point, all the sophistry in the world cannot explain away what scientific evidence—and reality—make plain. For example, polling in recent years has found that Republicans who live in areas directly affected by hurricanes tend to accept the reality of climate change more than they did previously. Likewise, as Americans see their families and communities affected in the most fundamental ways by the coronavirus, there might be broader acceptance of the relationship between their lives and the role of competent government—and scientific expertise—in protecting it.

Notably, according to some polls, Dr. Anthony Fauci, the infectious diseases expert who has become the go-to medical source on COVID-19, is the most trusted public figure in the country right now.

In many ways, these contrasting views are both about how the coronavirus crisis will affect the views of Americans about experts and the role of government, two of the foundational Republican principles I wrote about recently.

What neither of these writers discuss, however, is that the conclusions individual Americans draw from this crisis will be based predominantly on where they get their news. This graph from Pew Research is instructive on that point. 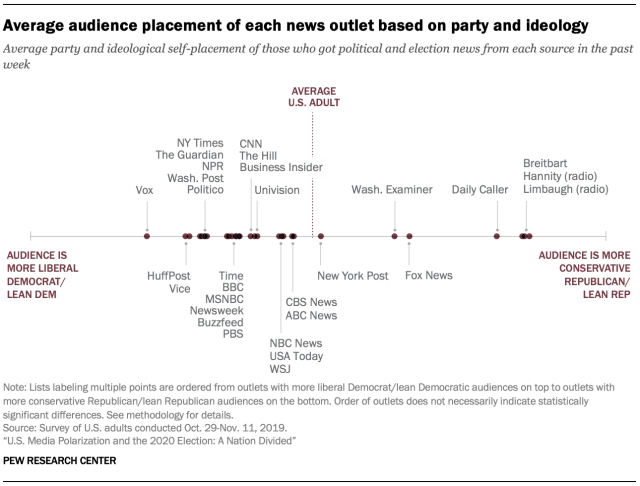 What this demonstrates is that Americans whose views are to the right of average get most of their information from propaganda outlets, while the rest of us glean from a mix of mainstream and liberal media. At this moment in the coronavirus crisis, media outlets on the right are pushing two major themes:

Take a look at how Laura Ingraham handled number two.

A quick fact-check indicates how she mangled the truth. First of all, the projection of two million deaths was what experts suggested would happen if we did nothing to mitigate the spread of coronavirus. The projection of 100,000-200,000 was what experts were suggesting we could expect given current mitigation strategies. What Ingraham doesn’t mention is that a more recent projection of about 80,000 deaths is just that… a projection by some experts. They are meant to be adjusted as the situation changes. It is also unclear why Ingraham, whose point is to demean expertise, would all of the sudden believe those who are projecting fewer deaths. Finally, note that whenever Ingraham uses the word “expert,” she employs air quotes, as if the use of the term is a misnomer. That is the core message she wants to send with a segment like this.

In the quote above, Weiler wrote that “all the sophistry in the world cannot explain away what scientific evidence—and reality—make plain.” He assumes that the lived experience of Americans during this pandemic can penetrate the kind of propaganda that is being spread by right-wing news sources. That remains to be seen.