According to the latest NBC/WSJ poll, Joe Biden leads Donald Trump nationally by seven points (49-42). But here’s the news that really counts.

Demographically, he’s where a winning Democratic nominee usually wants to be: His biggest advantages are with African-American voters (where he leads Trump, 85 percent to 7 percent), Latinos (60 percent to 26 percent), voters ages 18-34 (54 percent to 31 percent), women (56 percent to 35 percent) and whites with a college degree (55 percent to 37 percent).

Things don’t look much better for Republicans when it comes to retaining a majority in the Senate. Right now, Cook Political Report lists four GOP-held seats as toss-ups: Arizona, Colorado, Maine, and North Carolina. Cook might be a bit more bullish on behalf of Republicans than is warranted, as demonstrated by the fact that they still consider Arizona to be a toss-up. Democrat Mark Kelly has led Republican incumbent Martha McSally in the last nine polls—most recently clocking in with a nine-point advantage.

All of that might help explain why so many Republicans are desperately hoping for a renewal of the Tea Party spirit that garnered so much attention during the Obama administration. As David Catron demonstrates, they think they’ve found it in the recent lockdown protests.

At the national and state levels [Democrats] have disregarded voter lockdown protests with the same disdain with which they ignored the Tea Party movement ten years ago. The Democrats have clearly forgotten the price they paid for that blunder. Between 2010 and 2016 they lost Congress, 13 governorships, 816 state legislative seats, and finally the presidency. They regained some ground in 2018, but they won’t retain it if they don’t recognize the protests as the foreshock of an electoral earthquake.

It is possible that these protests will grow over time. But at the moment, what we are seeing is a few dozen protesters in states with millions of voters. Meanwhile, this is what we’re seeing in the polls.

More than eight in 10 voters, 81 percent, say Americans “should continue to social distance for as long as is needed to curb the spread of coronavirus, even if it means continued damage to the economy.” Only 10 percent say Americans “should stop social distancing to stimulate the economy, even if it means increasing the spread of coronavirus.”

That hardly registers as an “electoral earthquake.”

Republicans face a few challenges when it comes to reigniting the Tea Party fervor. The most important ingredient that is lacking is an African American president. There can be no doubt that the previous movement was fueled by racism. 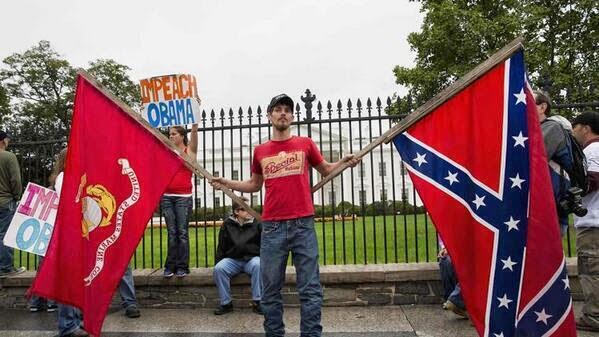 With that as the groundwork, Republicans were able to spread lies about Democratic policies—such as “death panels” in Obamacare.

It was fairly easy to lie about a program that hadn’t been implemented yet. But things are different with a pandemic. Contrary to what some people think, the coronavirus is spreading in the Republican stronghold of rural America.

Just as cases are starting to plateau in some big cities and along the coasts, the coronavirus is catching fire in rural states across the American heartland, where there has been a small but significant spike this week in cases. Playing out amid these outbreaks is a clash between a frontier culture that values individual freedom and personal responsibility, and the onerous but necessary restrictions to contain a novel biological threat.

The bump in coronavirus cases is most pronounced in states without stay at home orders. Oklahoma saw a 53% increase in cases over the past week, according to data compiled by Johns Hopkins University. Over same time, cases jumped 60% in Arkansas, 74% in Nebraska, and 82% in Iowa. South Dakota saw a whopping 205% spike.

A lot of people think that this new protest movement is bigger than it actually is because the news media has become obsessed with it, as Eric Boehlert documented.

Anxious for a political angle to the ongoing pandemic story and one that can produce instant conflict (as well as compelling pictures), the news media are showering attention on the small groups of GOP protesters who are angry about life-saving social distancing orders issued by governors to battle the Covid-19 pandemic…

Proving once again that every Beltway news cycle revolves around the very simple question of, ‘What are Republicans angry about today?, the recent emergence of Trump-sanctioned protests has grabbed the media’s attention, even though some events are drawing modest crowds.

None of this is to suggest that Trump’s supporters lack angst or enthusiasm. That is a given. But even 72 percent of Republicans say that Americans should continue “social distancing” measures. That doesn’t sound like a Tea Party revolt to me.