Whenever I post about the malpractice system, I try to make it clear that while I don’t consider it to be the cause, nor the cure, for the problems in our health care system, that doesn’t mean that the system isn’t broken in many ways. Nuisance cases do exist; cases that have real merit never see the light of day. One additional side effect of portraying the malpractice system as the boogeyman of the entire system is that we lose sight of the fact that it really does impact physicians. Take defense costs.

There’s a new paper in the Journal of Law, Medicine, and Ethics by yours truly and co-authors that looks at this in detail:

The objective of this study was to take a closer look at defense-related expenses for medical malpractice cases over time. We conducted a retrospective review of medical malpractice claims reported to the Physician Insurers Association of America’s Data Sharing Project with a closing date between January 1, 1985 and December 31, 2008. On average a medical malpractice claim costs more than $27,000 to defend. Claims that go to trial are much more costly to defend than are those that are dropped, withdrawn, or dismissed. However, since the overwhelming majority of claims are dropped, withdrawn, or dismissed, the total amount spent to defend them surpasses that spent on claims that go to trial. Defense attorney expenses account for the majority of defense-related expenses (74%), while expert witness expenses and other expenses split the remaining 26%. A strong association was also found between the average indemnity payment and the amount it costs to defend individual claims by specialty. Our study found that defense-related expenses for medical malpractice claims are not an insignificant cost. As state and federal governments debate how to repair the malpractice system, addressing the high cost of defending claims should not be ignored.

There are some high points that I’d like to hit. The first is what happens to claims that are filed: 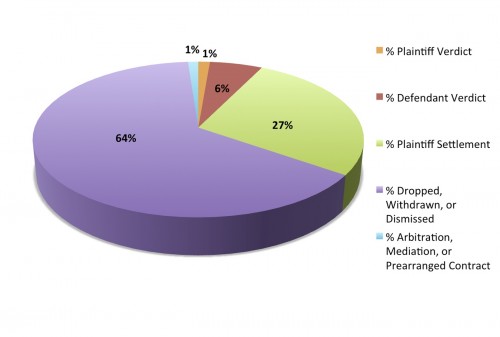 The first thing to note is that the majority of claims are dropped, withdrawn, or dismissed. Some look at this and say that it speaks to the fact that so many cases are “nuisances”. Others look at it and feel reassured. Most cases never really go anywhere. Another thing to note is that very, very few cases are won by plaintiff verdict. So very, very few cases wind up with big trial payouts. Focusing on these as a means to change the whole system (tort reform) doesn’t always make a whole lot of sense.

But defending cases is not cheap. Estimates put the costs of the “system” at about $5 billion. And all types of cases cost money to defend: 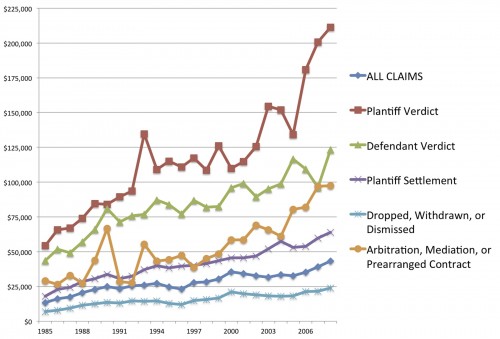 Not surprisingly, cases which go to court cost more. But even those cases which are dropped, withdrawn, or dismissed now average about $25,000 each to defend. Since they comprise such a large percentage of all claims, the expenses to defend these cases total more than one third of all defense costs.

Those costs may not seem like a lot when we talk about the $2.5 trillion we spend on health care each year. But that’s the point I’m often trying to make. Malpractice costs aren’t “real” to the country, but they are very real to physicians and malpractice lawyers. Those defense costs result in increased premiums, and they’re going up. That’s totally worth talking about.