Mayor Bloomberg is getting a lot of heat for his recent decision to ban large soft drinks from sale in many sites in the city. He thinks that it will reduce obesity, and eventually make people healthier. Critics disagree.

On the other hand, what’s up with this? 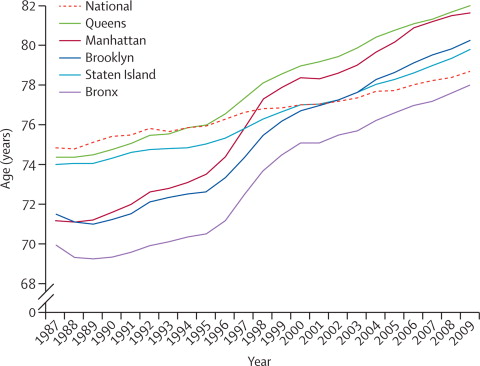 That’s the life expectancy of people in the five boroughs of NYC compared to the rest of the country (red dotted line). Details:

In the national context, the increase in New York City’s life expectancy stands out (figure). The Institute for Heath Metrics and Evaluation recently estimated the life expectancy for each of the USA’s 3147 independent cities and counties. Manhattan’s life expectancy rose 10 years between 1987 and 2009, the largest increase of any county, and the other four counties that make up New York City were all in the top percentile.

By contrast, national life expectancy lengthened only 1Â·7 years per decade, and the USA—already trailing the world’s longest lived countries—dropped back further. “What we see in the United States sends an alarming, alarming message”, says Ali Mokdad, who led the research. “We are not catching up with what everyone else is achieving. And in many counties in the United States, we are falling behind: our life expectancy is going backward.” In this context it is all the more urgent to understand the improvements witnessed in New York City, and the lessons that can be applied elsewhere.

Mokdad, and I’m sure NYC health officials, credit much of this to the many public health initiatives that have been enacted in city. These include things like calorie labels for food sold in chain restaurants, the banning of trans fats, prohibiting smoking in public spaces, high taxes on cigarettes, tons of bicycle lanes, and aggressive public information campaigns against obesity and for preventive health services. Being the skeptic I am, I think that’s far from proven. The population in NYC hasn’t been static for decades. People move in and out all the time. Moreover, other changes may have occured that we can’t track.

That said, this is somewhat compelling. It’s important to remember that the Bronx is the poorest county in the United States. About 30% of those living there do so below the federal poverty line, and and three quarters of them are black or Hispanic. While the life expectancy of that borough lags behind the other four, it has seen comparable increases in life expectancy to the other areas, and by 2009 had almost caught up to the national average.

We can debate other explanations for this. But maybe, just possibly, New York is onto something.