Last week the U.S. House passed a bill supported by a majority of the Democratic party and a minority faction of the Republican members, even though the Republicans are the majority party and control access to the House floor. This has occurred three times in the last three months:

These are rare violations of the Hastert Rule, which states that bills should only come to the floor of the U.S. House if they are supported by “a majority of the majority.” But the fact that these rare events occurred at all has sparked much consternation among political scientists seeking to understand these rare cracks in the House majority party’s hegemony, and conservatives flabbergasted that the GOP party leaders are not blocking progressive legislation from the floor of the House.

The Logic of the Hastert Rule

The implicit premise of the Hastert rule is that the majority party in the U.S. House is best understood as an organizational conspiracy. Majority party members are expected to vote for their party’s Speaker candidate (sorry, Seth), support the adoption of the majority-proposed chamber rules, and vote for the “special rules” that bring major bills to the House floor on terms dictated by the majority party. “Special rules” are as oxymoronic as they sound: each major bill gets its own set of debate terms as proposed by the Rules Committee. By buying into leaders that they may not love, rules and special rules that constrain them, the members of the majority party gain the power to keep bills off the floor entirely and to screen the amendments that come to a roll call vote.

The primary academic account of legislative parties as organizational conspiracies is provided by the research of Gary Cox and Mathew McCubbins. The theoretical basis of the Hastert rule is provided in chapter 3 of their 2005 book Setting the Agenda. Chapter 2 of the book, however, lays out the more fundamental logic of legislative parties: just win [elections], baby. Parties are organizations striving to win elections by protecting and enhancing the “brand name” of the party.

How do they do this? Usually, they try to keep their “sharpest conflicts” out of public view. The Hastert Rule is an expression of this goal: all else equal, the majority party looks bad when it brings up legislation that reveals its internal divisions. A vote that divides the members of the majority party is usually a tough vote, one that forces members to choose between their base constituencies and the general public (e.g. pro-life activists and the median voter), or between subconstituencies they do not wish to offend (e.g. Kansas Republicans voting on government payments to farmers).

BUT:  policy outcomes are secondary to the true goals of political parties. While individual House members may be true conservatives and sincerely desire to implement conservative policies, this is not why the House Republican party exists. Its true purpose is to win elections. If it is in the electoral interests of the Republican party to bring up legislation opposed by most of the House GOP and allow it to pass, it is their job to do so. What kinds of bills are good for the GOP brand but unworthy of GOP members’ votes?

At the same time, there are proposals that would get the support of most House Republicans but would NOT be in the political interests of the Republican party. At the risk of being uncharitable, it would seem from the 2012 cycle that eliminating the rape exception for an abortion could get the votes of many House GOP conservatives but be harmful to the party brand. 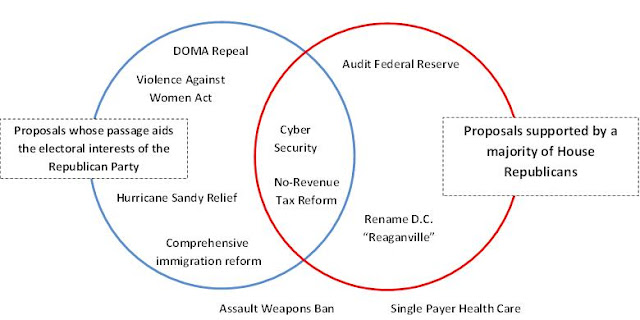 Ideally, the GOP leaders schedules bills from the intersection of the two circles. They probably have to deal with activists and interest groups who swear that their idea is in the intersection, and not just popular with conservatives. And if the Democrats are organized and strategic (that’s an IF), they work to move their favorite proposals from outside the circles into the blue circle, so that the GOP either allows their bills to come to the floor (a win) or keeps popular legislation off the floor (also a win).  But the lesson of the last three months is that there are bills in the blue circle outside of the intersection; sometimes it is in the electoral interests of the House GOP to let themselves lose.

[Originally posted at Mischiefs of Faction]