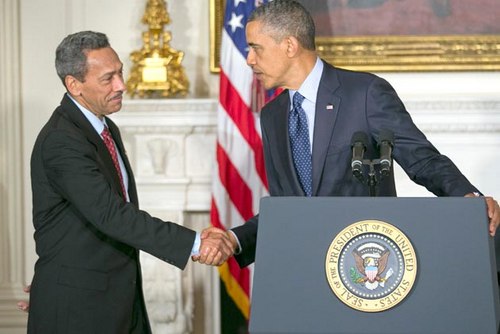 For the first time in 27 months, America has a nominee to run the Federal Housing Finance Agency, the federal conservator for government-sponsored enterprises (GSEs) Fannie Mae and Freddie Mac. Yesterday, President Obama nominated Mel Watt, a 20-year Congressman from North Carolina, to replace Ed DeMarco, who has been acting director of the agency since August 2009. Incredibly, the agency, which directly controls 60 percent of all US mortgages, has been without an official director since that time.

Watt, a longtime friend of the financial industry, might make a terrible FHFA director, and he might make a fine one. It doesn’t much matter because he’s unlikely to be confirmed by the Senate. The real story here is how the Obama administration has used the FHFA director position as a convenient distraction from their disastrous housing policies.

Watt’s record is decidedly mixed. His district includes Charlotte, home to Bank of America, and the largest retail banking industry hub outside of New York City. In his 20-year career, during all of which he sat on the House Financial Services Committee, he voted for Gramm-Leach-Bliley (which overturned the Glass-Steagall Act’s firewall between commercial and investment banks), the Commodity Futures Modernization Act, and basically every deregulatory bill that led the country into the 2008 financial crisis. During the Dodd-Frank financial reform, he tried to stop the bipartisan Audit the Fed bill from passing, by substituting a toothless alternative. He has received over $365,000 in donations from the commercial banking industry during his career, likes to hold soirees at his house for Wall Street lobbyists, and raised funds from financial interests before key Dodd-Frank votes, actions which drew a formal investigation from the Office of Congressional Ethics. Watt was later cleared of wrongdoing in that case (though he subsequently tried to defund the ethics office).

However, the story is not all bad. Many Democrats attest to his support for strong consumer protections in the housing market, including an anti-predatory lending law he introduced with former Rep. Brad Miller in 2004. Progressive housing groups like the Center for Responsible Lending, as well as the entire liberal side of the spectrum in Congress, supports Watt’s nomination.

Plenty of people I trust, including those who worked with him in Congress, believe Watt would competently run FHFA. But the discussion of Watt’s strengths and weaknesses misses the point. Too many liberals, in no small part egged on by the White House, have built up this single FHFA position as the sole impediment to justice and relief for millions of troubled homeowners. For years, Ed DeMarco has been a cartoon villain in this rendering, a former Bush appointee fiendishly destroying the American dream all by himself. (I’m hardly being hyperbolic; one site terms him the biggest roadblock to our economic recovery.)

The reality is more nuanced. It’s true that DeMarco has slowed Fannie Mae and Freddie Mac from implementing principal reductions for troubled borrowers, the best and most sustainable loan modification, which would actually save the two GSEs money while promoting economic recovery. DeMarco’s arguments against principal reduction are weak and seemingly ideological, warning about “moral hazard” for homeowners who might deliberately default to get a principal reduction (though, oddly enough, few applied similar reasoning to the 2008 bank bailouts). Fittingly, the Congressional Budget Office came out just yesterday and confirmed that principal reductions would save billions of dollars from lower default costs and increase disposable income and net wealth for homeowners. CBO adds that, even if Fannie and Freddie made the principal reduction option available under the most expansive standard, it would only result in 57,000 new loan modifications—to small a number, considering more than 14 million homeowners owe more on their mortgage than the house is worth.

In other areas, DeMarco, who has a rigid conception of his role as a conservator of taxpayer dollars, has been far more aggressive against Wall Street, in ways that most liberals and housing activists would support. FHFA is currently leading the largest prosecution against banks for their role in the financial crisis of any government agency, a lawsuit against 17 banks concerning $200 billion in faulty mortgage-backed securities purchased by Fannie and Freddie. FHFA claims banks misrepresented the quality of the loans in those securities when they sold them to the GSEs, and wants the banks to buy them back. The banks recently tried to reverse the rulings of the district court judge presiding in the case by going over her head to a federal appeals court; this gambit failed. If FHFA wins the case it would probably trigger a wave of private litigation, and completely alter the banks’ legal exposure. It’s a far more consequential action, if you’re concerned about justice for those who caused the financial crisis in the first place. (Nobody knows Watt’s position on these lawsuits, and whether he would continue to pursue them at FHFA.)

So why the liberal crusade against DeMarco? President Obama’s economic and political teams have simply engaged in a skillful public relations effort. By offloading the entire responsibility for the nation’s housing woes to one regulator, the White House has used DeMarco as a foil, averting their own shameful responsibility in designing the failed HAMP program and letting banks off with sweetheart settlement deals for systematic crimes committed against homeowners. DeMarco turns out to be very useful to the White House, absorbing all the scorn of liberal housing groups while the Administration floats along without blame.

The Administration has slow-walked replacing DeMarco in a manner that can only suggest they’re not all that perturbed with having him remain in place. Top officials like Gene Sperling told housing groups before the 2012 election that the Administration would fire DeMarco and replace him in a recess appointment. They made these assurances for months, even asking housing groups for lists of acceptable replacements. This wouldn’t work today; since the election, the recess appointment process has been stymied by a federal court ruling banning nearly all recess appointments. (The case is now being appealed to the Supreme Court.)

However, there is still one route that could work: according to a memorandum prepared by New York Attorney General Eric Schneiderman, the White House has the power to remove the Acting Director and replace him with a deputy. This is where the actual action is around the DeMarco situation, as it represents the only serious option to take him off the job. AFL-CIO President Richard Trumka showed his cards in his statement on the Watt nomination, when he concluded, “Already, there are press reports that Republican senators intend to delay or block Congressman Watt’s nomination. President Obama should move immediately to replace Acting Director DeMarco with another Acting Director to ensure FHFA is managed in the public interest.” Notably, Elizabeth Warren today called on DeMarco to be removed even before Watt gets confirmed, the first time she has asked for DeMarco’s ouster.

This is why Watt’s nomination—through the broken standard Senate procedure, where he will almost certainly be filibustered into oblivion—stinks to high heaven. It has all the earmarks of a kabuki theater operation. Senate Republicans blocked the last Democrat, Joseph Smith, who Obama nominated to replace DeMarco in 2010, and the Administration made little effort to get him confirmed. Watt supports principal reduction, and that alone is probably enough to earn near-unanimous opposition from the right. Bob Corker, a respected voice on the Senate Banking Committee for Republicans, lambasted Watt in his initial statement, saying “I could not be more disappointed in this nomination.” Richard Burr, from Watt’s state of North Carolina, did endorse him yesterday. Unfortunately for the nominee, there’s only one Republican Senator from his home state, and he will need seven at least.

The White House certainly knows that the Senate is unlikely to confirm any FHFA nominee with a positive disposition toward principal reduction (or, frankly, any nominee at all). As is so often the case in Washington, there’s the official story and then the reality. Mel Watt has been nominated and will, in all likelihood, not be confirmed. And then Democrats will pillory the opposition for being indifferent to the plight of struggling homeowners. Underneath the surface, the White House will yet again get to deflect blame for their inadequacies in dealing with an historic housing crisis, and they get to keep the scapegoat, Ed DeMarco, in place at FHFA in the bargain.

David Dayen is a freelance writer based in Los Angeles, CA.