As part of a mini-symposium on campaign effects in 2012, I welcome this guest post by Ryan Enos and Anthony Fowler.  The first post in this sequence, by Michael Franz, is here.

Does the 2012 Obama campaign deserve the hype?  Many journalists have praised the technological and strategic advantage of Obama over Romney’s campaign. The 2012 Obama campaign is often described as an extension and improvement of the 2008 effort, which has been credited as one of the first campaigns to make extensive use of rigorous academic findings about effective Get out the Vote (GOTV) and persuasion techniques.  Yet, as some academics have pointed out – the final vote margins were very close to predictions that would be obtained with no effect of the campaign, indicating that, perhaps, the new campaign techniques had minimal effects or that Obama’s advantage was neutralized by an equally savvy Romney campaign.   As part of an on-going research project, we use individual-level data to quantify Obama’s campaign advantage.

The data indicate that campaigns have large voter mobilization effects. By examining the individual behavior of voting-eligible citizens in the 38 media markets that span both battleground and non-battleground states (more than 42 million voters in total), we can isolate the effect of presidential campaigns.  These voters are subject to the same media exposure, but they differ in the amount of mobilization received from the campaigns.  Only voters in the battleground states were subject to the massive mobilization efforts of the Romney and Obama campaigns, thus allowing us to isolate the effect of the campaign.  And this difference is quite apparent in citizen behavior: registered voters in battleground states were, on average, 4.5 percentage points more likely to vote than their non-battleground counterparts in the same media market.

In many respects, this is an impressive aggregate effect of mobilization.  However, given the massive investment by both campaigns, some might have expected a greater effect.  Part of this effect may also be attributed to the psychological reactions of citizens in battleground states to the closeness of the election (the “p” term in the calculus of voting), which would be present regardless of the campaigns.  However, previous research suggests that the direct contribution of election closeness to turnout is small.

On the other hand, this 4.5-point result is an underestimate of campaigns’ reach because it includes voters that campaigns don’t attempt to mobilize. While registered Democrats and Republicans in these media markets (7.5 million and 7.0 million individuals, respectively) were heavily targeted by the Obama and Romney campaigns, others may not have been.  Among these select groups, we estimate massive campaign effects of 15.4 percentage points for registered Democrats and 13.8 percentage points for Republicans.   These numbers suggest impressively effective mobilization efforts by BOTH the Obama and Romney campaigns

Despite all the celebration of the Obama campaign’s technological and other superiority, their campaign only had a 1.6 percentage point advantage over Romney in turning out party registrants.  Of course, we don’t know whether Democratic registrants are inherently more difficult to mobilize than Republican registrants (although we find similar effects in 2008 before the Obama campaign had adopted the technological innovations of 2012, casting further doubt on the importance of these innovations).  Also, keep in mind that the 1.6 percentage point difference that we detect may have been enough tip the election in a very close state like North Carolina in 2008, so the Obama mobilization effort may have helped to pad Obama’s victory.  Nonetheless, these preliminary results suggest that the praise for Obama’s 2012 campaign may be overblown.  Both campaigns appear to have been effective in mobilizing voters, and the 2012 Obama campaign was not dramatically more effective than Romney’s campaign or Obama’s 2008 campaign.

Do these findings align with the expectations of academics and other people interested in politics?  In order to quantify just how large the Obama mobilization advantage was generally thought to be, we surveyed students, academics, political journalists, and campaign professionals by circulating a survey through our professional networks.   Our intention was to capture a convenience sample of people that are very interested in politics.  (We think we succeeded; we asked three political knowledge questions from the American National Election Study, and 94% of our respondents got all three correct.)  Our respondents were convinced of Obama’s superior mobilization, 95% thought the Obama campaign did a better job than the Romney campaign.  We asked respondents to quantify how much they thought Obama and Romney mobilized their supporters.  A clear pattern emerges: most respondents thought that Obama was far better than Romney in mobilizing his supporters, with a median estimate of a 4.9 percentage point advantage for Obama.

We summarize the responses of some groups in the table below (note that these groups are not mutually exclusive).  Political journalists and campaign professionals in our survey were the best at estimating the difference between the campaigns, but their estimates of the size of each individual mobilization efforts were too small.  Students and academics better estimated the size of the mobilization effects, but overestimated the size of Obama’s advantage.  Our personal predictions (before estimating the actual effects) were closer to the journalists’ predictions. 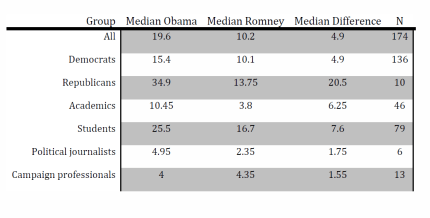 Interestingly, Republicans have both the largest estimate of Obama’s mobilization effort and the campaigns superiority over Romney.   This is, of course, not a representative sample of Republicans, but one interesting interpretation of this result is that Republicans are motivated to attribute Obama’s victory to superior campaigning, rather than Democrats having an advantage in underlying party or ideological closeness with voters.

Overall, the survey results confirms our suspicion that the vast majority of experts and political observers believe that Obama’s campaign was significantly more effective than Romney’s at turning out supporters.  Our empirical evidence suggests that even though presidential campaigns are very effective in this regard, Obama’s campaign – the most technologically advanced mobilization effort in American history – was not dramatically more effective than Romney’s.