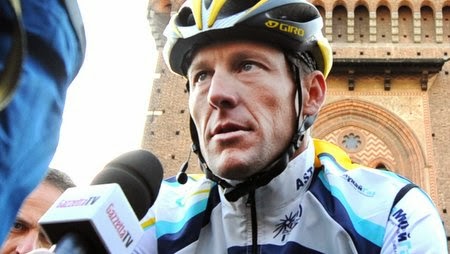 Yesterday, in a last ditch effort to avoid testifying in court to his doping history, Lance Armstrong agreed to pay a $3 million settlement to a Nebraska-based insurance company which had previously given him performance bonuses. In exchange for the money, Armstrong’s sworn written statements will likely be barred from release.

Seems like a lot of money to avoid another testimony, considering he’s already publicly admitted to Oprah Winfrey that he used performance-enhancing drugs. That is, until you realize that if he admits in a court of law that he lied to his sponsors about doping, it will make it much easier to get him to pay monstrous financial penalties. The $3 million is a paltry price to pay in comparison to what Armstrong is really up against.

After Armstrong admitted to doping in January, he’s been busy with a litany of pending lawsuits in state and federal court. And the federal suit, brought on behalf of the U.S. Postal Service, his primary sponsor, is seeking hefty retribution. Under the Federal False Claims Act, a U.S. citizen can pursue major lawsuits against entities accused of defrauding the federal government. A guilty verdict means that the defendant must pay triple the amount of damages—in this case the trial could cost Armstrong up to $120 million, or three times what the U.S. Postal Service spent to sponsor Armstrong’s team over the course of six years.

It’s sure been a crap year for Lance Armstrong. He had to return his Olympic medal, give up his seven Tour de France awards, and lose all his major sponsors. Yet still, it could stand to get much worse.

In 2005, Armstrong testified under oath that he did not use performance-enhancing drugs. And now the trial attorney representing the U.S. government is accusing Armstrong of falsifying documents, evading drug tests, and committing perjury.

It might seem strange to see Armstrong twisting arms to get out of testifying in court something he already admitted so forthrightly on TV. But TV is just TV; it’s not legally binding. One can claim entertainment value, or First Amendment liberties, or any sorts of clever/dubious rationales. (A judge already dismissed a case this past September saying that Armstrong’s lies are protected in his memoirs because they were not advertising other products.)

Besides, Armstrong’s defense centers less on whether or not he used drugs and more on what others perceived as the contractual agreement between them at the time. Insurance companies and the Post Office paid him millions of dollars to sponsor him and his team, and they argue that their name is defrauded as a result.

Armstrong argues that the Postal Service knew of his doping allegations and thus got exactly what they bargained for. He defends himself by saying that the government took no steps to investigate him despite the evidence, because they were contently reaping the fruits of his fame.

Given that Lance Armstrong realizes he’s going to have to pay some sum of money for all these suits—suddenly $3 million doesn’t seem so bad. One can understand why he’d try and avoid more concerted, direct legal questioning that could be used against him in future lawsuits. And the legal issues differ in these cases than in the content of his Oprah interview. Had he testified today in Austin he’d likely be faced with a barrage of questions about what he represents, what he told his sponsors specifically, did they rely on his representations, why exactly did they give him money, etc.

Some people are watching these events play out with a substantial level of schadenfreude—the slow, painful and expensive downfall of the duplicitous cyclist represents cold hard justice. Yet this is heartbreaking for many others. I even had a family member quite close to me repeatedly defend Armstrong’s record, and wore his Livestrong bracelet every day for more than a decade until last year, when he finally couldn’t manage to defend him anymore. Lance Armstrong raised near $500 million for cancer research, and provided serious inspiration for people all around the world. There’s something ultimately depressing about all this, that snark, scorn and mockery can’t quite assuage.