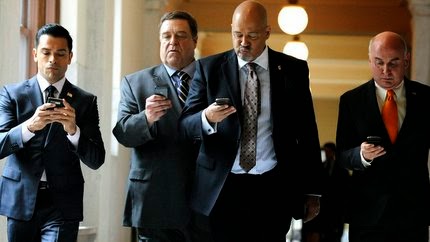 Earlier this week I attended a screening of the first three episodes of Alpha House, the new Amazon Prime comedy starring John Goodman about four GOP senators who share a Capitol Hill row house. The screening was in a theater at the Newseum on Pennsylvania Avenue, and like other events where entertainment industry glamour meets DC political culture, the atmosphere was buzzy but awkward, with lots of young, well-dressed Hill aides and broadcast producers, who are normally nonchalant in the presence of senators and cabinet secretaries, excitedly scanning the crowd looking for stars.

The first episode of the show opens with one of the funniest scenes in the history of television. It’s morning at the house, the alarm goes off, and Bill Murray (in a cameo appearance) is asleep in a narrow bed. John Goodman lumbers in, looks out the window, sees cops and a TV crew emerging from SUVs, and asks “weren’t you supposed to give yourself up at DoJ this morning?” Murray throws back the covers, yells “FUCK, FUCK, FUCK,” races into the bathroom, and shoves a toothbrush in his mouth, still yelling “FUCK, FUCK, FUCK.” Goodman mutters “man, that is piss poor staff work.”

The rest of the three episodes I saw, while not as hysterically funny as that first scene, are supremely entertaining. The four main characters, awful as they are (a corrupt black senator from Pennsylvania, a closeted yet homophobic gay Mormon from Utah, a self-regarding Latino from Florida, and a North Carolinian–the John Goodman character, modeled after Fred Thompson–who enjoys the perks of the job but hates to do any work), are somehow likable. You find yourself rooting for them in their struggles against ethics committee probes and Tea Party primary challengers.

In an on-stage q&a with Andrea Mitchell after the screening, cartoonist Gary Trudeau, the show’s writer and creator, explained that he made all the characters Republicans for the simple reason that Republicans and their travails really are the big story in Washington these days, and he liked the challenge of trying to humanize them. Journalist Jonathan Alter, its executive producer (and Washington Monthly contributing editor), explained that his role in the process was to bring “verisimilitude” to the plot. I think the series, at least what I’ve seen so far, succeeds on both these levels. And with Washington continually throwing up weirder-that-fiction real-life stories–like yesterday’s conviction of conservative sheep-reasearch-subsidy-slaying GOP freshman Trey Radel on cocaine possession– that’s no easy feat.