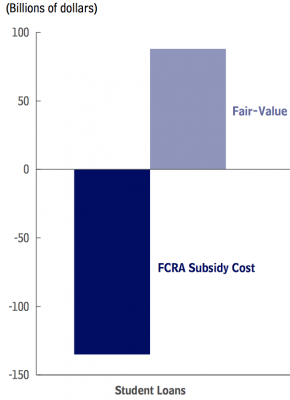 Soaring student loan debt seems to be the next crisis waiting to explode. Universities keep jacking up their tuition and the U.S. government keeps financing it through a seemingly unlimited supply of student loans. As I’ve written before, student loans exceedÂ $1 trillion and more than 11 percent of student loan balances are 90+ days delinquent or in default.Â When will student loan defaults, already the highest of any consumer loan category, simply get too high that politicians put the brakes on this lending machine?

I suspect one of the reasons that there hasn’t been more pressure in Washington to address student debt is that the federal student loan program is a profit center on the U.S. government’s official ledger books. The Congressional Budget Office (CBO) says that the four main student loan programs are expected to generate $135 billion in profit over the ten years from 2015-2024 (see here). It does that by making a lot of assumptions. Basically, it is guessing that more than enoughÂ students will pay back their loans, plus interest, over the next 30 years to more than offset all the loans that aren’t repaid. And it books those future cash flows as profits today.

The problem is that this profit may be no more than an accounting sleight-of-hand. In the same document, dated May 2014, the CBO explains that if it discounted future cash flows at a higher rate, using the same accounting methods that private banks use on their loans, then these profits would instantly vanish and turn into a tax-payer loss of $88 billion.

The non-partisan CBO has been arguing for years that it should use a higher discount rate because it would reflect market risks. Currently it discounts future cash flows by the yield on Treasuries, which is such a safe investment, that it effectively assumes that the economy will never go into a recession. What if the economy tanks and fewer students can get jobs and can’t repay their loans? Right now, the accounting assumptions don’t factor thatÂ possibility in.

In this case, the CBO’s hands are tied. Despite its desire to use more realistic accountingÂ assumptions, the CBO is bound by a 1990 Congressional statute, the Federal Credit Reform Act (FCRA), to use the outmoded discount rate. It would take Congressional action to change that.Â (The chart on the right here shows the difference in costs. The big dark bar shows the $135 negative cost, or profit, by using the current FCRA methodology. The light bar shows a positive cost of $88 billion if a higher discount rate, known as fair-value accounting, were used.)

The CBO also points out that regardless of which accounting figure you believe in, neither the $135 billion profit figure nor the $88 billion loss factors in administrative costs. That’s the cost of issuing loans, tracking down students after graduation and collecting their monthly payments. Jason Delisle of the New America Foundation dug into federal budget documents and found that the administrative cost amounts to 1.7% of loan issuance. That’s a reasonable figure for overhead. But when you multiply that by the $650 billion dollars in undergraduate loans that the government expects to issue, suddenly profits turn into losses. Delisle calculates that the undergraduate lending program will cost taxpayers $16.7 billion even using the government’s inflated accounting figures.

“Officially then, federal loans to undergraduates, even using official government cost estimates, are made at a cost to taxpayers, not a profit as some claim,” Deslisle wrote.