In Greek parliamentary elections yesterday, the Syriza party, “a group dominated by Marxist university professors and Communist activists,” won 36.3% of the vote and 149 out of 300 seats, just short of a majority. On top of this, while the center-left New Democracy party came in second with 129 seats, in third place was the neo-Nazi Golden Dawn Party with 18 seats. Today, Syriza’s leader Alexis Tsipras was sworn in as prime minister after forming a coalition with a small right-wing party, the Independent Greeks. At the Monkey Cage, Dan Hough has a nice analysis of what Syriza is likely to do once it takes power. My point here is not specifically about Greece, but how this illustrates an important thing about democracies: despite their many virtues, bad things happen to democracies during severe economic depressions. It is important to remember this when anyone suggests a huge economic contraction as a solution to a nation’s problems. Whether or not the economic pain will solve the problem at hand, the resulting political turmoil is almost always not worth it.

Greece has suffered immensely since the 2008 economic crises started. Its economy has shrunk by one fourth. We know from the massive political science literature on retrospective voting that parties tend to lose reelection when economic growth is weak. Yet we also know from the historical record that, in the face of extreme economic pain, voters will often turn to any political factions who are not associated with the status quo. Whom they choose and what ideological direction the country goes in is very unpredictable. 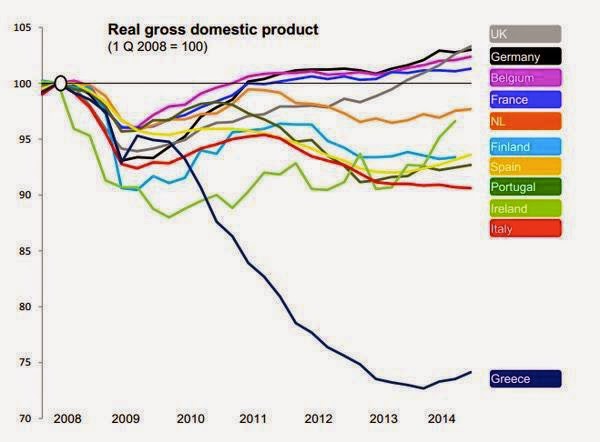 It is important to remember this whenever someone suggests that a severe economic collapse is necessary to teach wrongdoers a lesson. In the European Union, some have argued that southern European states like Greece and Spain need to suffer because of their fiscal irresponsibility. In the United States, many on the far left and right argued that the federal government should let AIG and other big investment banks fail. Letting banks fail (instead of bailing them out) had the appeal of punishing the very unsympathetic banking industry and creating an incentive for banks to avoid irresponsible behavior in the future. The Bush and Obama administrations’ response that they needed to bail out the banks to avoid a catastrophic economic collapse got little sympathy.

But whether the alleged wrongdoers (southern European governments or U.S. big banks) are guilty or not, allowing depressions to happen is never a good idea. It is far better to put new rules in place that prevent the bad behavior from happening in the future. When depressions happen, the wrongdoers may or may not learn the intended lesson, but even if they do, those effects will be swamped by bigger consequences: great human suffering and the complete discrediting of the existing political establishment. When dominant parties are discredited, it is very hard to predict who will come to power or what (possibly crazy) agenda they will implement. Here is Larry Bartels’ description of the unpredictable policy consequences of the global Great Depression of the 1930s:

Sending a democracy into a deep depression is like playing Russian roulette with its political system. It is never a good solution to a policy problem. Almost any other remedy is preferable.