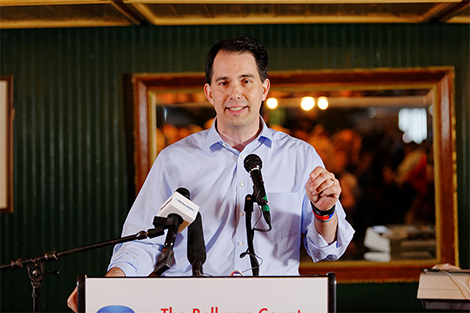 Earlier today (and this is sort of Scott Walker Day since he formally announced his presidential candidacy this morning) we talked about Scott Walker’s reported plans to start pretty hard right and then move to the “center” as the primary season unfolds. He might as well start hard right, since he just finished a state legislative session where his budget policies (especially an effort to reduce funding for and end tenure in higher education) were too conservative for some of his fellow Wisconsin Republicans.

As Harry Enten at FiveThirtyEight seeks to demonstrate today, Walker’s exactly where his targeted voters are.

Although our three-pronged ideological ratings — which look at congressional voting records (not applicable to Walker), donors and public statements — place Walker’s ideology near the middle of the pack, voters describe him as more conservative than most of the other Republicans. In an average of four YouGov surveys during June, in which 0 was the most liberal and 100 the most conservative, Walker was rated on average as a 70. Bush scored a 60, Rubio a 64.

In fact, Walker’s score is 7 points more conservative than the average Republican candidate (63). To give you an idea of how big a difference that is, the difference between Hillary Clinton and Bernie Sanders was only 2 points (25 vs. 23) during the same period. Walker’s score places him among candidates that most would generally regard as too bombastic or far-right to win the nomination, such as Ted Cruz, 2008 runner-up Mike Huckabee and 2012 runner-up Rick Santorum. Pat Buchanan, the last standing conservative alternative in 1996, scored a 73 in primary polls.

But the good news for Walker is that Republicans voters have become more conservatives since Pat Buchanan’s salad days.

Enten goes on to speculate that the advantage relatively moderate candidates have is a presumed superior electability, which one might guess is a bigger factor than ever this year given the GOP’s presidential losing streak and the vast harvest of reactionary policies that might be enacted if even a less strident conservative is in the White House with a Republican-controlled Congress sending up its worst.

But Walker, of course, has a solid electability argument of his own which you can sum up as 3-4-2: he’s won three elections in the last four years in a state Barack Obama carried two times. Sure, his rivals could try to undermine that argument by pointing out that none of those three Walker victories involved a presidential electorate (two were midterms and the third was a special recall election), which is what Republicans will face this year. But then that involves telling Republican voters, who almost certainly think 2012 was an aberration and 2014 a prophecy, something they really, really don’t want to hear.

Now Walker is vulnerable to polls showing him getting beaten by HRC in Wisconsin, but he can show he’s outperformed polls in the past, too. So he could present himself as a pretty scientific example of the so-called Buckley Rule, dictating that Republicans nominate the most conservative electable candidate available. On top of that, he’s got this ability to convince conservatives without saying a whole lot that he’s actually more conservative than they think. And as noted this morning, he does have a track record of nasty surprises for liberals, and nothing pleases your hard-core conservative more than that.