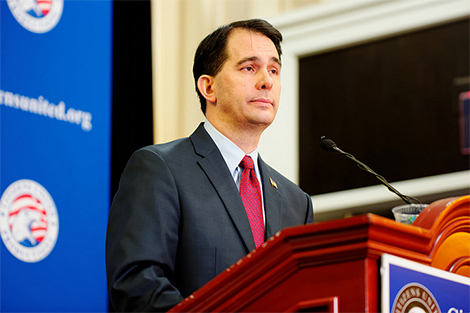 I’m going to do something I rarely do here at PA, but that will save time and space right now: quote extensively from an earlier post–in this case one on the different “electability” arguments of different GOP presidential candidates, as published back in March. Bear with me:

Jeb Bush’s is the traditional Median Voter Theorem-driven argument: conservatives need to avoid extremism on issues where they disagree with swing voters—you know, like immigration and education. GOP needs to trust their nominees to be ideologically reliable and give them flexibility to “run to the center.”

Rand Paul, who challenged Ted Cruz’s “winnability” yesterday, is offering what I’d call the “new coalition” argument based on picking off independents and even Democrats via an emphasis on common areas of interest like criminal justice reform and privacy. This is not a “move to the center” argument; it’s more like “move the debate” to subjects where there is a natural convergence without the need for much compromise.

And then there is Cruz, and even more strikingly Scott Walker, offering the traditional, if much-mocked, movement conservative argument that a combination of ultra-high “base” turnout, “hidden voter” turnout, and swing voters attracted by the sheer principled power of unadulterated conservative ideas is the winning formula.

Walker is far and away the most articulate about this; his motto that “you don’t have to go to the center to win the center” is a direct repudiation of the traditional view Jeb’s team is espousing. And he has what he considers proof of this ancient conservative belief: his three wins in Wisconsin in four years, which he attributes to his ability to impress and attract Obama voters (a somewhat dubious proposition given the different electorates in presidential and midterm—not to mention specials like the Wisconsin recall election of 2012—elections, but it’s at least plausible) with exactly the kind of vicious and uncompromising conservatism the base prefers.

Cruz tries to emulate the Walker appeal by claiming he put together the same kind of “big tent” coalition in Texas, though it’s not real convincing since in his one general election he ran against weak Democratic opposition in a deep red state.

You will note the little hole in Walker’s electability argument that was evident to anyone who thought about it with an awareness of turnout disparities between presidential and non-presidential elections.

Well, now that awareness is spreading. On the day of Walker’s presidential announcement, Josh Kraushaar of National Journal went deep on the subject and threw a lot of cold water on the idea that the Wisconsin governor has shown any real appeal beyond “the base.”

Walker’s success had as much to do with the political calendar and the state’s polarized electorate as it did with crossover appeal. He won only 6 percent of Democratic voters in his 2014 reelection. Many African-American voters simply stayed home during Walker’s gubernatorial campaigns, while a disproportionate number of college students sat out the contentious June 2012 recall election—which took place after campuses’ spring semester concluded. That’s not likely to repeat itself if he’s the GOP presidential nominee.

According to exit polling, young adults under the age of 30 made up 20 percent of the 2012 presidential electorate, but that number dropped to 16 percent during the recall election. White voters made up 91 percent of the recall vote, but only 86 percent in the last presidential campaign. The African-American percentage of the electorate was nearly twice as high in November 2012 (7 percent) as it was two years prior in 2010 (4 percent). In the Democratic bastion of Milwaukee County, turnout for the 2014 midterm election was only 74 percent of the vote total for the 2012 presidential election. In deeply conservative Waukesha County, that number was much higher: 83 percent.

Does it matter that Walker’s electability claims may be based on a misunderstanding? Maybe not. As I noted in the March post, it’s based not just on his electoral record but on an ancient conviction of movement conservatives (dating back to the title of Phyllis Schlafly’s pro-Goldwater book of 1964: A Choice Not an Echo). As a matter of fact, many folks on the left share it; you could put together a pretty good organizing meeting for the Church of Maximum Partisan Differentiation drawing from both tribes. If challenged on his record, Walker could easily say, as Cruz is prone to do, that the GOP tried the “median voter theory” approach in the last two cycles and lost.

Still, Walker’s electability claims are much like his “economic development” program in Wisconsin: boilerplate rhetoric with a distinct aroma of fraud. Another few polls showing him getting trounced by HRC in Wisconsin should do the trick, but won’t for true believers.