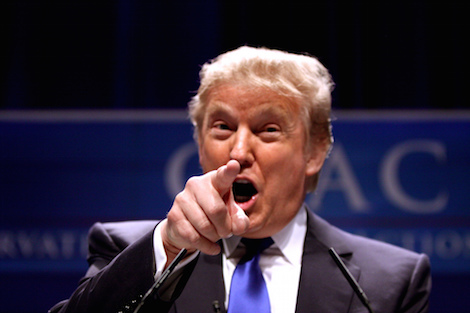 Well, I expected the Family Leadership Summit in Ames, Iowa, and the Netroots Nation gathering in Phoenix, to be potentially significant presidential campaign events over the weekend (see Nancy LeTourneau’s succinct summary). But I didn’t figure (a) Donald Trump might hand his many Republican detractors the sword with which to slay him; and (b) Hillary Clinton might obtain a significant advantage from skipping NN.

Let’s look at The Donald’s situation in this post.

As you may have heard by now, under questioning from Frank Luntz in the event’s strange Q&A format about his feud with John McCain (who last week called Trump’s followers “crazies”), Trump allowed as how he didn’t consider McCain to be a war hero because “I like people who weren’t captured.” There were scattered (and perhaps shocked) boos from an audience that on average wasn’t a big pro-McCain assembly, and before the event was over the other candidates were either attacking Trump from the stage or sneaking away to blast him via tweets or interviews. Rick Perry even called on him to withdraw from the race.

But nobody exceeded the Republican National Committee in reacting to Trump’s remarks:

Sean Spicer, the RNC’s chief strategist, released a statement saying, “Senator McCain is an American hero because he served his country and sacrificed more than most can imagine. Period. There is no place in our party or our country for comments that disparage those who have served honorably.”

“[No] place in our party or our country,” eh? Is the idea to expel Trump from the GOP and then put him on an ice floe drifting into the Bering Sea?

Trump spent yesterday (mostly on Twitter) and early this morning (on the Today show) trying to change his story–or one might think, digging himself in deeper–by saying his main problem with McCain was the Arizonan’s “abandonment” of veterans in the Senate.

Ever since news spread of the original gaffe, there’s been a robust offline debate among progressive scribblers about what this means for the presidential contest. A surprising number of my friends are convinced that it won’t hurt Trump or could actually help him, since he feeds on both good and bad publicity and his core supporters hate McCain and the RNC anyway.

I dunno. Perhaps I was too affected by the whole Cult of the Vietnam POW (read Rick Perlstein’s The Invisible Bridge for a very thorough discussion of Nixon’s exploitation of those POWs to retroactively justify his failed Vietnam policies), but my gut feeling is that mocking a revered longtime POW is within the Republican context close to being the political equivalent of the Sin Against the Holy Ghost. And the over-the-top reaction from other GOPers reflects that belief. We will now see the entire kitchen sink thrown at him: the donations to Democratic candidates and to the Clinton Foundation; the lefty issue positions he’s made and only partially abandoned; and of course, his own record of dubious-sounding draft deferments. My guess is he cannot help but lose support, but we’ll soon see.

Perhaps this is all exactly what Trump needs to take his presidential campaign out of the GOP and into a third-party candidacy. In that case Republicans will rue this weekend far more than Donald Trump.