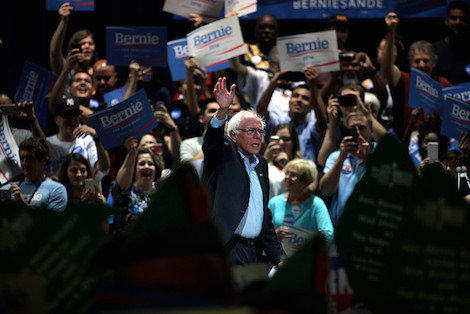 Prominent in today’s political news is a trio of Quinnipiac polls from the battleground states of Colorado, Iowa and Virginia showing Hillary Clinton’s support plunging in all three in general election trial heats against Jeb Bush, Marco Rubio and Scott Walker. She trails in all nine matchups, though she’s pretty close in the three involving Virginia. And her favorability/unfavorability ratios have deteriorated significantly since the last Q-Pac polling of this group of states in April.

Jeb Bush’s favorability ratio isn’t too hot in these states, either; Walker’s and Rubio’s are above water, though a lot of voters still don’t know them.

But the most novel information in these polls is that they are the first I’ve seen to test Bernie Sanders as comprehensively as HRC. And in Iowa and Colorado, at least, he’s basically doing as well as Clinton against the three Republican rivals, not that she’s created that high a bar to reach. His favorability ratios are significantly better than hers in all three states, though some of that is clearly a matter of Republicans not knowing who he is.

There is a rebuttable presumption out there in pundit land that Sanders would be a general election disaster for Democrats. Any evidence showing he’s as electable as HRC is an important talking point for his campaign.