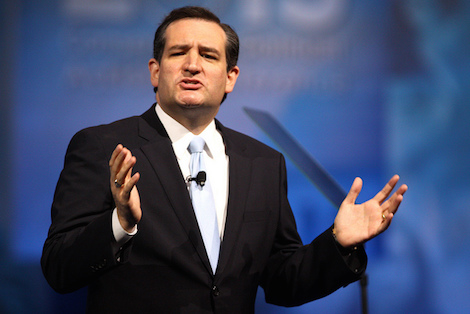 What happened in the U.S. Senate yesterday was fascinating, but the nitty-gritty details of how it came about are probably less so. As Politico has it, when Sen. Ted Cruz “came to the floor looking for 16 senators to agree to hold a roll-call vote, only three raised their hands.” This is a reference to a rule on the yeas and nays.

If sixteen equaled “one-fifth of a quorum,” that means that only 80 senators were present when Cruz made his request. But this isn’t significant. What matters is that the Senate typically approves these kind of requests without any debate or controversy. So much so, actually, that the request is a formality, almost like seeking recognition to speak from the chair.

“Granting a sufficient second for a roll-call vote is done customarily in the United States Senate,” Cruz told reporters. “Denying it is extraordinary, and it was done as a consequence of Majority Leader Mitch McConnell being afraid of this issue.”

He accused McConnell of scheming with Democratic leader Harry Reid.

“To see the so-called Republican leader whip against allowing a vote to defund Planned Parenthood … makes clear that the McConnell-Reid leadership is united in favor of Big Government,” Cruz charged.

Explaining what happened is not an easy job. For starters, the Senate also refused to hold a vote on Sen. Mike Lee’s non-germane amendment, and that was the Planned Parenthood vote that Cruz referred to in the quote above. The amendment that Cruz was trying to introduce had to do with Iran. It would have prohibited sanctions from being lifted on Iran “until the country recognizes Israel’s right to exist and frees four American hostages.”

The bill under consideration was the Hire More Heroes Act of 2015, but that’s deceiving because it’s actually a bill to pay for our federal transportation needs. And the dispute arose from Majority Leader McConnell’s decision to allow a vote on an amendment reauthorizing the Export-Import Bank.

For Ted Cruz, if the Export-Import Bank is germane to transportation, then so are Planned Parenthood and Iran.

Unless you are some kind of procedural geek, this stuff is as exciting as watching paint dry. But the overall result is actually pretty cool. On Friday, Ted Cruz went on the Senate floor and called his own party’s leader a liar, which is a clear violation of the Senate rules on decorum (Rule XIX, Section 2).

2. No Senator in debate shall, directly or indirectly, by any form of words impute to another Senator or to other Senators any conduct or motive unworthy or unbecoming a Senator.

On Sunday, he was rewarded by having to watch virtually the entire Senate rebuke and humiliate him when he sought recognition to force a roll call vote.

And there were no shortage of senators eager to explain their rebuke of Cruz:

“You learn that in kindergarten: You learn to work well together and play by the rules,” said Sen. Lamar Alexander of Tennessee, a close McConnell ally who was beaming after Cruz and Lee were handed such lopsided defeats. “Another thing you learn in kindergarten is to respect one another.”

“I think it was a violation of the rules,” said Sen. Thom Tillis (R-N.C.). “It’s not how you treat a colleague regardless of how you feel.”

Tillis and several other GOP senators said Cruz’s rhetoric backfired. “Generally speaking,” Tillis said, senators declined to give him a roll-call vote because they disapproved of his name-calling and the risky precedent his tactics would set if he were successful in forcing a vote…

…“It’s very unfortunate,” Sen. Susan Collins (R-Maine) said of Cruz calling McConnell a liar. “I know emotions run high on issues in the Senate, and those are the times when I think we have to take special care to abide by the rules of the Senate, particularly Rule 19, which is very clear that no senator is to impugn the integrity of another senator.”

“Let’s even assume that he’s right, which he wasn’t, you still don’t do that,” Sen. John McCain (R-Ariz.) said of Cruz’s floor antics.

There were actually some legitimate concerns about the gambit Cruz was trying to use to get a vote on his amendment because it would set a bad precedent and create chaos in the Senate if every senator could force a vote on an amendment, but you can see from the quotes above that the thing at the forefront of his colleagues’ minds was Cruz’s behavior not his tactics.

If you like Republican food fights, this is a pretty good one. And Cruz is on the side of opposing Iran, Planned Parenthood, the Affordable Care Act, and the Export-Import Bank.

Who do you think the base will support in this spat?