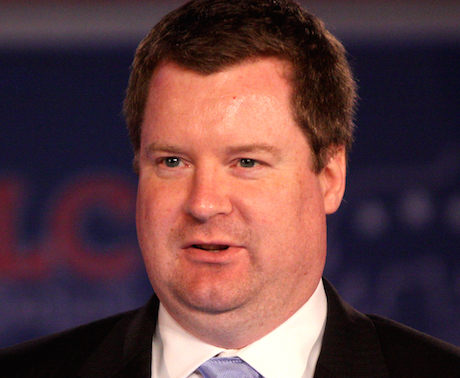 The fury of antichoicers that their long-planned video stings aimed at Planned Parenthood did not instantly shut down the “abortion industry” (and more importantly, all that birth control and health services dispensing that is actually Planned Parenthood’s main preoccupation) is getting a little out of control. In one of his strange middle-of-the-night ukases, Pope Erick Erickson has announced that no one is allowed to think differently than he does about the videos:

We have passed the point where Nazi comparisons are inappropriate. In the latest video about Planned Parenthood, if you want to watch it, you will see an admission that some of the children are born alive before being killed and carved up — their bodies being sold essentially for scrap.

Well, no, no and no, but let’s let Pope Erick continue with his tirade:

If Republicans are not willing to make this their hill to die on and even see the government shutdown to stop this, the Republican Party needs to be shut down.

The Party of Lincoln that rose from the ashes of a whig Party that would not stand up to slavery must stand up to this evil. The American public is staring evil in the face and it looks a lot like them. It must end.

If Abraham Lincoln’s party will not fight to stop a practice that defends itself with the same arguments used by proponents of slavery, it is time for a new party….

You will be made to care about this. You will not be allowed to sit by and make excuses. You will be not be allowed to say it is tissue, goo, or innocent. These are human beings. These are the future of this country harvested for their organs. They are being killed. The arguments in support of it are the arguments in support of slavery. This is evil and you must care.

And people accuse liberals of trying to exercise mind control.

In case, I guess, anyone though he was sleep-blogging, Erickson came forth with a new post this morning that made his demands and threats even clearer and more categorical:

Republicans in the Congress are beginning to use the word “try.” They will try to defund Planned Parenthood. But the President has a veto and they do not have the votes to override the veto

Sen. Lindsey Graham (R-SC) has moved from try to “can’t.” He says Republicans cannot defund Planned Parenthood because of the President’s veto.

This is really, really simple.

If Republicans do not defund Planned Parenthood, they will see a great portion of their base vanish overnight. That is not an exaggeration.

Planned Parenthood, we now know, is killing living children who have already been born, cutting them up, and harvesting their organs.

Now you might think ol’ Erick’s just an inflated bloviater whose chosen style is the bullyboy threat of a political commissar. But the thing is he’s going to be the impresario of the Republican presidential cattle call next weekend (the Red State Gathering, in Atlanta) that will come immediately after the first candidate debate, with ten candidates currently confirmed: Jeb Bush, Scott Walker, Marco Rubio, Ted Cruz, Mike Huckabee, Rick Perry, Chris Christie, Carly Fiorina, Bobby Jindal, and yes, even Donald Trump. This will be the event at which “winners” at the debate try to spin madly and consolidate their gains, while “losers” seek to make a quick recovery. It’s a pretty big deal, and additionally, historians will someday recognize that its counter-scheduling against the Iowa Straw Poll had a lot to do with that one-time major “winnowing” event falling to its death.

I somehow don’t think any of these candidates are going to be allowed to leave Atlanta without answering their host’s insanely furious demands for a government shutdown to “defund” Planned Parenthood.

It’s interesting, this phase of political history where the configuration of forces in Washington means that the GOP cannot insist on having its way without risking or executing a government shutdown. And that in turn means that the big competition among conservative activists is to have the cause that’s the latest pretext for a government shutdown, whether it’s Obamacare, the debt ceiling, immigration policy or the Iran Nuclear Deal.

Now the antichoicers are putting in their bid to be the constituency that rules the roost.

Last time they did this, Congress’ weird intervention into the end-of-life deliberations of Terri Schiavo’s family was the result. Judging from Pope Erick’s bulls today, this could get a whole lot worse.