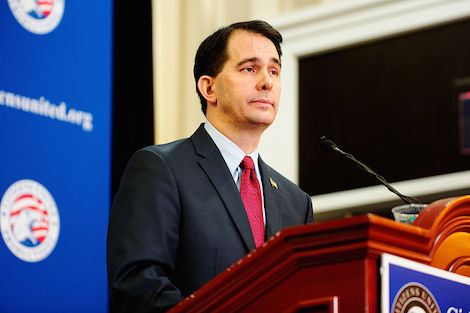 It would seem that Donald Trump is no longer alone in the GOP presidential field in openly calling for the deportation of all 11 million undocumented people in this country. Scott Walker, who’s gyred and gimbaled on immigration policy for quite some time, is now echoing The Donald in saying they must all be deported before we can even think about letting some of them stay, per BuzzFeed‘s Rosie Gray:

“I’ve talked about how going forward we should change the rules, the law, but I think in terms of deporting, the best thing we can do is enforce the law,” Walker said when asked whether children born in America to immigrants who came here illegally should be deported.

“What we should do is enforce the law,” Walker said when asked again. “If we enforce the law, we’re not gonna have that problem going forward, a lot of people in the media here and elsewhere want to talk about several steps down the way,” Walker said, saying that it was important first to secure the border and enforce immigration law.

There’s some word salad in there, but since Walker is going out of his way to telegraph the similarity of his views on the subject to Trump’s, I think it’s fair to sign him up for the Cattle Car Caucus until such time as he takes himself out. Wonder who’s next?