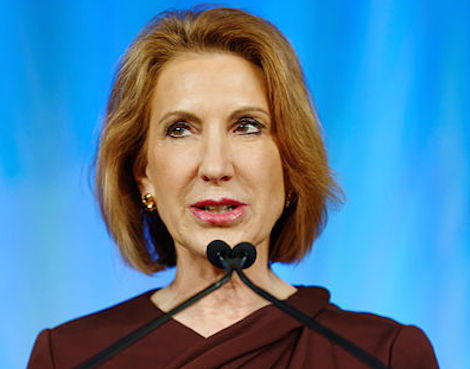 So best I can tell, Donald Trump is the first GOP presidential candidate to state the obvious about rival Carly Fiorina (per Benjamin Bell at ABC News):

During a visit to the Iowa State Fair on Saturday, Republican presidential candidate Donald Trump — while repeatedly describing her as “nice woman” — took aim at his GOP rival, former Hewlett-Packard CEO Carly Fiorina, attacking her record in the private sector and her failed California Senate bid.

“She’s a very nice woman, she got fired, she did a terrible job at Hewlett-Packard, she lost in a landslide — other than that, she’s a very nice woman,” Trump, echoing recent comments, told ABC News Martha Raddatz when asked for his thoughts on his solo female GOP competitor for the nomination.

Hard to argue with that, though some would say Fiorina’s 10-point loss to Barbara Boxer in 2010 doesn’t qualify as a “landslide” (though 10 points has always been my own definition, and if you toss in the fact that Carly was losing that badly in the best GOP year since 1994 or maybe 1946 and it’s hard to say she ran a very good campaign).

Looking it up to see if The Donald was saying this at every stop, I discovered he said the identical thing about Fiorina back in April:

I imagine he’ll say it again if he winds up in the same debate as Carly next month. What with conservative media and the candidates other than Trump ignoring her resume problem up until now, she’s had plenty of time to rehearse an answer.