It’s been fascinating to listen to pundits try to capture just what it is that Donald Trump is tapping into with the extremist base of the Republican Party. You hear words like “populist anger” a lot. And the fact that he is appealing to white working class voters (mostly men).

But I’d suggest that you take a minute to watch The Donald talk to Bill O’Reilly Tuesday night. See if you can count the number of lies that he tells.

If rationality mattered to any of the people Trump appeals to, the following information might be important:

* We are not experiencing a crime wave in this country. As a matter of fact, “crime rates in the United States have been on a steady decline since the 1990s.”

* First generation immigrants (including those who are undocumented) actually commit fewer crimes than those who are natural born citizens.

* We are also not experiencing a wave of undocumented immigrants coming across our border. As a matter of fact, “the number of unauthorized immigrants currently living in the U.S. has stabilized in recent years.”

* Rather than a wave of new unauthorized immigrants, 62% of undocumented adults have lived in this country 10 years or more.

Taking all that into account, it’s pretty safe to say that Trump isn’t appealing to the “rational” side of Republican voters. Rather, I’d say this map pretty well sums up what’s going on. 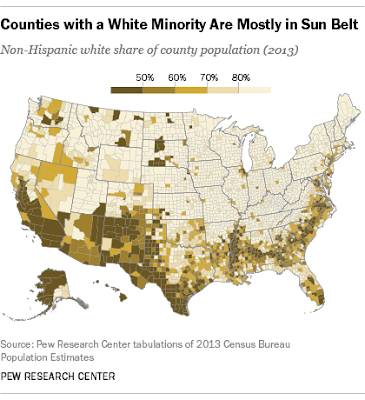 If you were to overlay that with a map showing Trump’s appeal to white voters, I’d suggest that the correlation would be pretty strong (especially from Texas to the East Coast).

The world is changing for these folks and they’re scared to death about that. If you add the fact that the country just elected its first African American President…twice…you get a couple of the factors that Tim Wise called “the perfect storm for white anxiety.”

The furor Trump is both tapping into and fanning is simply a continuation of the confederate insurgency we’ve been seeing for a few years now. It’s time we named it for what it is and get on with building the Third Reconstruction.