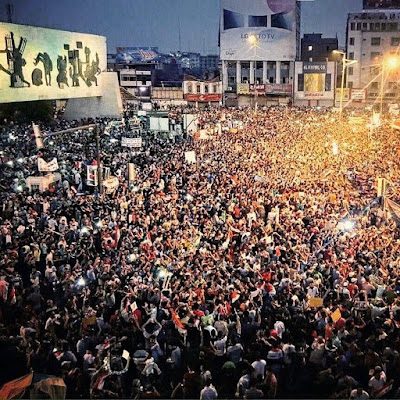 That photo comes from the Facebook page of Ali Eyal. Reuters seems to be one of the few news organizations that is reporting on what happened yesterday. Apparently these demonstrations have been going on for a while now and Prime Minister al-Abadi has made some concessions. But this is the part of the Reuters report that caught my eye.

The capital and many southern cities have witnessed demonstrations in recent weeks calling for provision of basic services, the trial of corrupt politicians, and the shakeup of a system riddled with graft and incompetence.

Tens of thousands of demonstrators filled Baghdad’s Tahrir Square on Friday in what a senior security official called the biggest protest of the summer. Thousands more rallied in Najaf, Basra and other cities across the Shi’ite southern heartland following a call from powerful Shi’ite cleric Moqtada al-Sadr.

Protesters’ demands, which initially aimed at improving power supply amid a sweltering heatwave, have focused more on encouraging Abadi to accelerate reforms, put corrupt officials on trial and loosen the grip of powerful parties over the state.

Here’s the caption Ali Eyal posted with the picture up above:

Good evening Baghdad, Thousands of Iraqis take to the streets of Baghdad to protest government corruption and demand reforms, No to Sunni government, no to Shia government! Yes to secular state!

And here is a tweet from an Iranian student in Canada that translates the message from protest signs:

This is certainly a story that we should be keeping an eye on.