As serious as the situation is, I’ve actually found it odd that the focus of our conversation in this country following the attacks in Paris is all about Syrian refugees. Sure…there are the occasional digs at President Obama for not being “tough enough” on ISIS. But that kind of talk is not necessarily front and center right now.

The are a couple of reasons why we’re not hearing Republicans talk about what we should be doing about ISIS. Some of them tried to make a big deal about the fact that France bombed ISIS in Raqqa two days after the attacks. Here’s a typical response:

Dear President Obama, today France is leading from the front to contain what you couldn’t contain leading from behind.

That kind of statement demonstrates Erickson’s ignorance of the fact that over the last 15 months, the U.S. has carried out 6,353 airstrikes against ISIS. Here’s how that looks on a per day basis in graph form: 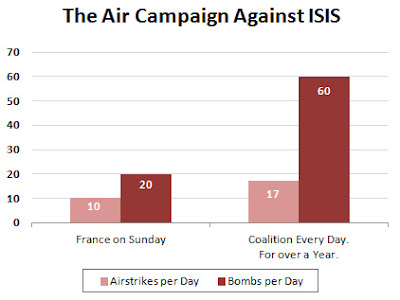 According to both Zack Beauchamp and Robert Pape, it is this air campaign combined with advancements by local ground troops that has “contained” ISIS in Iraq and Syria – possibly leading them to start seeking out targets overseas.

Why were restaurants, a stadium, and a concert hall in a Western capital “accurately chosen?”

The answer can be found in Syria and Iraq. There, since September 2014, ISIS has lost significant territory and faces the near-term prospect of losing to a multiprong offensive by the international coalition that could decisively cripple the terrorist group. With these daunting prospects, ISIS is lashing out, much like a cornered animal, and the Paris attacks are part of this.

Beyond all that, Kevin Drum did an excellent job the other day of rounding up the various proposals of Republican presidential hopefuls about what we should be doing to defeat ISIS. As it turns out, they’re not very different from what President Obama is currently doing or what Hillary Clinton proposes to do. Even in his speech yesterday at the Citadel being touted as a call for U.S. ground troops in the fight against ISIS , Jeb Bush was noticeably vague.

“The United States should not delay in leading a global coalition to take out ISIS with overwhelming force,” Mr. Bush told an audience of cadets at the storied military college. “Militarily, we need to intensify our efforts in the air — and on the ground.”

“The United States — in conjunction with our NATO allies and more Arab partners — will need to increase our presence on the ground,” he added.

What Republicans need in a situation like this is something that creates a lot of daylight between themselves and Democrats, while also ramping up the fear. Since they don’t really have any ideas about how to deal with ISIS that fit that bill, they’ve stirred up a hornets nest with talk about Syrian refugees as the vehicle by which ISIS will infiltrate the U.S. Never mind that it is all talk that has no basis in actual fact. So far, it seems to be working.