* Last week a lot of the news about the Democratic presidential primary focused on Bernie Sanders’ interview with the New York Daily News. It is worth noting that Hillary Clinton sat down for an interview with the same publication on Saturday. I doubt hers will get much attention though. Whether you agree or disagree with what she said, she demonstrated a total mastery of the topics explored.

* As I predicted a few weeks ago, the issue of open vs closed primaries is coming up for discussion as we get closer to the New York primary. Alex Seitz-Wald provides an overview that contains this information – which is probably not good news for the Sanders campaign.

Recognizing the danger last summer, pro-Sanders volunteers did an impressive job of organizing registration drives ahead of the October and March deadlines. Team Bernie NY alone says they collected information for 13,000 registrations. Hughes said over 4,600 people used his website to submit registrations.

But while state officials reported an unprecedented surge in new voter filings just ahead of last month’s deadline, overall voter growth was disappointing.

As of April 1, Democrats had added about 14,000 people to their rolls (out of close to 6 million registered voters) since the same day last year, according to Board of Elections data. Republicans added only 12,000 (out of close to 3 million).

* Last week I noted that, not only has Obama preserved more acres of land and water as national monuments than any other president before him, but those designations have been good for local economies. So of course it comes as no surprise that the Center for American Progress has identified an anti-parks caucus in Congress.

Today, Washington’s bipartisan work to protect America’s parks and public lands seems like a distant memory. Since 2010, Congress has been incapable of passing individual parks and wilderness bills, legislators are pressing to sell off tens of millions of acres of publicly owned lands, and laws which help protect at-risk public lands—including the Antiquities Act and the Land and Water Conservation Fund—are under relentless attack. A Center for American Progress analysis found that between January 2013 and March 2016 members of Congress filed at least 44 bills or amendments that attempted to remove or undercut protections for parks and public lands—making the 114th Congress the most anti-conservation Congress in recent history…

Research for this brief found that the breakdown of congressional support for national parks and public lands can be traced to 20 lawmakers—a group of U.S. senators and representatives that CAP has dubbed the anti-parks caucus—whose record on parks-related issues in the last three years sharply diverges from that of their colleagues and the American public.

* Here is some encouraging news about the economy:

Don’t look now, but over the last six months the narrative in the jobs market has changed for the better — for Obama and for ordinary Americans. Encouraged by improving employment prospects, more than two million people have flooded into the work force since September, the biggest six-month gain in records going back to 1990, using data adjusted for changes in population estimates. And unemployment has continued to fall, though admittedly by a smidgen, from 5.1 percent. 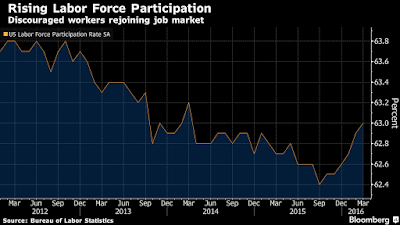 * Over the course of this primary (especially on the Democratic side), we’ve heard a lot about rising college tuition and increasing student debt. We’ve heard a lot less about this challenge:

In nearly half the country, it’s now more expensive to educate a 4-year-old in preschool than an 18-year-old in college, a finding that illustrates the rising burden many families face affording care for children.

The annual cost of care for a 4-year old at a full-time day-care center or school is greater than the average cost of in-state tuition at a four-year institution in 23 states, according to new data from the Economic Policy Institute, a left-leaning think tank.

* Finally, tonight and tomorrow night PBS will air Jackie Robinson, a film by Ken Burns, Sarah Burns & David McMahon. Stephen Colbert talked with Burns about why this documentary is so relevant today.