A smiling green man-frog doesn’t initially come off as sinister, and the origins of Pepe the Frog were pretty innocuous. But back in May, Olivia Nuzzi explained how this cartoon image had been appropriated by what we now call the “alt-right,” or white supremacists.

“We basically mixed Pepe in with Nazi propaganda, etc. We built that association,” @JaredTSwift said.

He sent me a “rare Pepe,” an ironic categorization for certain versions of the meme: Pepe, his eyes red and irises swastika-shaped, against a trippy rainbow backdrop. “Do with it what you will,” he said.

Building the Trump association came next, after which @JaredTSwift said the images got crossover appeal.

In writing about this, James Fallows says:

I’m not going to share the Pepe variants I keep getting in the mail, but they include:

Pepe as a sly smiling gas-chamber operator, inviting Jews to take a “shower”; Pepe working the crematoria, after the gas chambers have done their job; Pepe at the glorious new southern Wall, grinning at the plight of Mexicans trapped on the other side; Pepe as an Orthodox Jew, smirking (because of the “inside job”) as the World Trade Centers come down 15 years ago; Pepe with a lynch mob.

I am so proud to be one of the Deplorables #Trump2016 pic.twitter.com/IFD1hfC60w 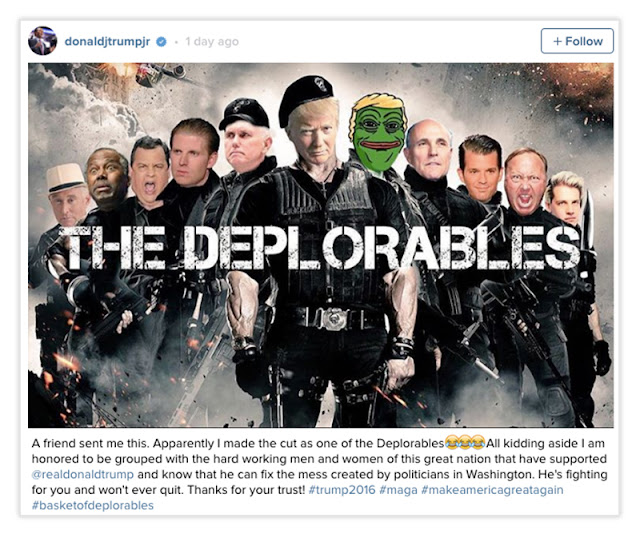 Both of them express their pride in being associated with a white supremacist symbol. But they aren’t the only ones. Back in October, when white supremacists first started linking Pepe with Trump, the image was tied to a video titled, “You can’t stump Trump.” The candidate himself got in on the act, tweeting the image and video to places like Breitbart and The Drudge Report.

Fallows says that all of this reminds him of the incident with the Trump campaign’s use of the Star of David. He’s right. But this one is even more sinister. Perhaps that’s because it seems to be flying under the radar a bit and is more reminiscent of a dogwhistle. The use of Pepe the Frog is designed to send a message to white supremacists: “We’re with you.” I don’t know of a better way of describing that than “deplorable.”