* These are the two women who are showing us a path forward in this election. Today they were both in North Carolina demonstrating what it means to be “stronger together.” 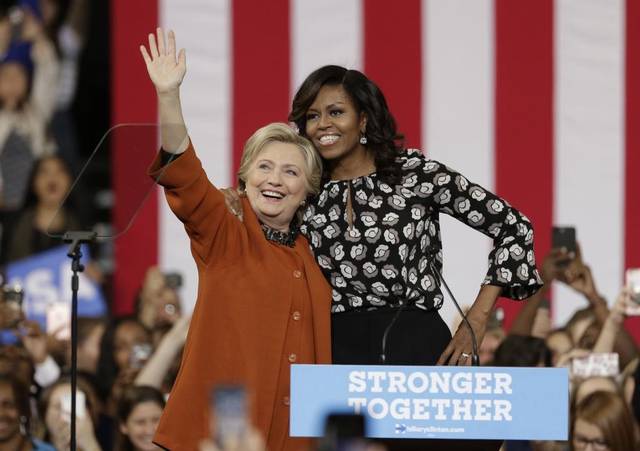 * After Michelle Obama’s powerful speech in New Hampshire, a friend of mine said that FLOTUS was her new hero. I agreed – but said that she had become a hero of mine way back in 2007 when she gave this speech. Take a look to remind yourself that she’s always been a strong voice speaking out and lifting us up.

* The “scoop of the day” goes to Joshua Green and Sasha Issenberg for their report, “Inside the Trump Bunker, With 12 Days to Go.” I agree with Kevin Drum that what they heard from the Trump campaign was not about voter suppression (as many are suggesting) – but the same old negative campaigning we’ve been subjected to over the years. This was the much more interesting part:

Powered by Project Alamo and data supplied by the RNC and Cambridge Analytica, his team is spending $70 million a month, much of it to cultivate a universe of millions of fervent Trump supporters, many of them reached through Facebook. By Election Day, the campaign expects to have captured 12 million to 14 million e-mail addresses and contact information (including credit card numbers) for 2.5 million small-dollar donors, who together will have ponied up almost $275 million. “I wouldn’t have come aboard, even for Trump, if I hadn’t known they were building this massive Facebook and data engine,” says Bannon. “Facebook is what propelled Breitbart to a massive audience. We know its power.” Since Trump paid to build this audience with his own campaign funds, he alone will own it after Nov. 8 and can deploy it to whatever purpose he chooses. He can sell access to other campaigns or use it as the basis for a 2020 presidential run. It could become the audience for a Trump TV network. As Bannon puts it: “Trump is an entrepreneur.” Whatever Trump decides, this group will influence Republican politics going forward. These voters, whom Cambridge Analytica has categorized as “disenfranchised new Republicans,” are younger, more populist and rural—and also angry, active, and fiercely loyal to Trump. Capturing their loyalty was the campaign’s goal all along. It’s why, even if Trump loses, his team thinks it’s smarter than political professionals. “We knew how valuable this would be from the outset,” says Parscale. “We own the future of the Republican Party.”

* It’s hard to know how things in Congress will shake out after the election. But this strikes me as one of the most consequential battles this country has faced in a long time.

Senate Republicans are choosing sides ahead of a brutal conflict over how to handle the lingering Supreme Court vacancy, with Jeff Flake firing back Thursday at a suggestion by Ted Cruz that the party could indefinitely block any nominee from Hillary Clinton.

The internal GOP battle over what to do about Merrick Garland — President Barack Obama’s choice for the court — and any future Clinton nominee will dominate the lame duck session of Congress after the election. Senate Majority Leader Mitch McConnell (R-Ky.) is holding the seat vacant for the next president — but Cruz has suggested that Republicans could continue to block Democrats from appointing a new nominee for much longer.

That’s a strategy that doesn’t sit well with Flake, a fiscal conservative from Arizona who’s shown deal-making tendencies since joining the Senate in 2013.

“You won’t be surprised, I do not agree. There’s a difference between what might be constitutional and what you could do politically and what you should do. And I think leaving a vacancy for up to four years is not why we’re here,” said Flake, who now believes Clinton is sure to defeat Donald Trump in 12 days. “It may be what becomes a litmus test if you’re a true conservative … Just to go on record, I won’t be part of that.”

* I guess it shouldn’t surprise us that the news about Trump’s sexual assaults will be followed by other public figures being exposed.

A 41-year-old lawyer has accused Supreme Court Justice Clarence Thomas of groping her in 1999 when she was a young foundation fellow in Washington, D.C., National Law Journal reported Thursday.

The lawyer, Moira Smith, said that Thomas repeatedly touched her rear multiple times as he pleaded for her to sit next to him at a dinner party hosted by the head of her scholarship program. The alleged incident occurred, Smith said, when just the two of them were alone near the table she was setting for the party.

Four people who knew Smith at the time confirmed to National Law Journal that they recalled her recounting the incident to them soon after it happened.

* This is an interesting way for a tax exempt organization to handle the restrictions on endorsing political candidates: “The Yale Record Does Not Endorse Hillary Clinton.”

This year’s presidential election is highly unusual, but ultimately no different: The Yale Record believes both candidates to be equally un-endorsable, due to our faithful compliance with the tax code.

In particular, we do not endorse Hillary Clinton’s exemplary leadership during her 30 years in the public eye. We do not support her impressive commitment to serving and improving this country—a commitment to which she has dedicated her entire professional career. Because of unambiguous tax law, we do not encourage you to support the most qualified presidential candidate in modern American history, nor do we encourage all citizens to shatter the glass ceiling once and for all by electing Secretary Clinton on November 8.

* The Obama administration continues it’s progress on the Clemency Initiative.

.@POTUS has commuted more sentences than the past 11 presidents combined. Today, 98 deserving people get a second chance: pic.twitter.com/vf5eMmbyTl

* Finally, it’s true…the kids are all right. So you should listen to them already.