* I noted earlier that the 17 people Trump has nominated to cabinet-level positions have a combined worth more than that of over one third of the 126 million households total in the US. So this comes as no real surprise:

By selecting ExxonMobil CEO Rex Tillerson to serve as secretary of state, Donald Trump on Tuesday guaranteed that his four most influential departments will, if confirmed, be led entirely by white males for the first time since George H.W. Bush’s first Cabinet was approved in 1989. Bush kept white males in those positions for his entire term…

Of Trump’s 18 choices to date — excluding his vice president and senior White House staff — 14 are white, of which 12 are male. None are Latino. 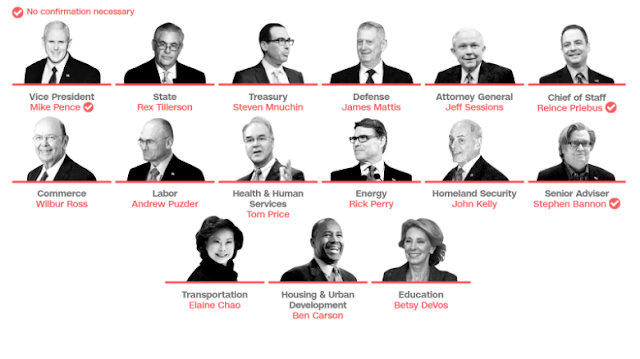 Unless Trump picks a diverse Secretary of Agriculture, the line of succession to the presidency would be 12 white guys — via @maddow pic.twitter.com/0qwFpdWxoa

* I respond to this news with a solemn moment of remembrance for those we lost:

Dylann Roof is guilty of murder and hate crimes, a federal jury decided in the slayings of nine people last year at Emanuel AME Church.

* For years, liberals were cautious about touting the redistributive effects of Obamacare. As Republicans continue to look towards repeal of the law, Howard Gleckman crunches the numbers on how that will affect Americans across the class divide.

Repealing the Affordable Care Act would cut taxes significantly for the highest income one percent of US households, according to a new Tax Policy Center analysis. At the same time, it would raise taxes on average for low- and moderate-income households.

* Today Tom Perez made a formal announcement that he will enter the race to be the next DNC Chair. If you don’t know a lot about what he brings to the table, I suggest reading this article about him by Justin Miller. I’ll go on record agreeing 100% with Paul Waldman about this contest.

In case you’re curious, I haven’t yet come to a conclusion about which one of them would be better. Ellison is extremely smart and capable, and as he points out, he’s had great success in his congressional district building a grassroots network. Perez is not just universally admired among Democrats, but among those who have worked with him directly gets the kind of almost worshipful praise that you rarely hear, in Washington or anywhere else.

So we’ll have to see what their plans and vision for the party are as they continue to make their case…But here are some things that most definitely don’t matter in choosing the next DNC chair: What state or region of the country they come from. How emphatic their statements of support for Israel have been. Which politicians they might be a proxy for. Whether they can personally “connect” with some group of voters you think Democrats would do well to appeal to. That stuff is completely irrelevant.

* Finally, yesterday afternoon the White House held the final Hanukkah reception of the Obama administration. The President’s short remarks are not simply meaningful to those of the Jewish faith, but to all of us. He talks about the menorah they will light, which was made by Elie Wiesel’s granddaughter when she was in kindergarten. 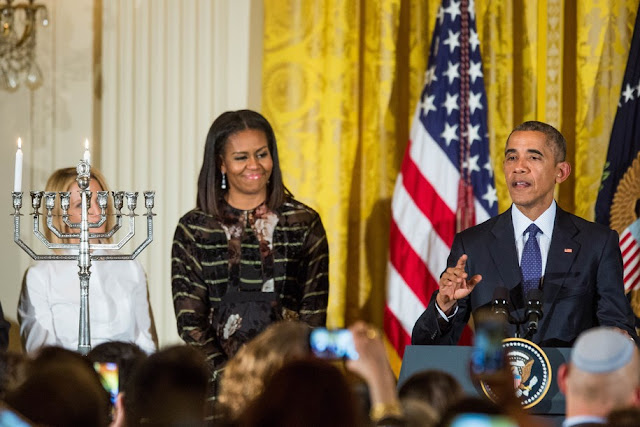 This is the season that we appreciate the many miracles, large and small, that have graced our lives throughout generations, and to recognize that the most meaningful among them is our freedom. The first chapter of the Hanukkah story was written 22 centuries ago, when rulers banned religious rituals and persecuted Jews who dared to observe their faith. Which is why today we are asked not only to light the menorah, but to proudly display it — to publicize the mitzvah. And that’s why we’ve invited all these reporters who are here.

Everybody in America can understand the spirit of this tradition. Proudly practicing our religion, whatever it might be — and defending the rights of others to do the same — that’s our common creed. That’s what families from coast to coast confirm when they place their menorah in the window — not to share the candles’ glow with just your family, but also with your community and with your neighbors…

We’ve lit a number of beautiful menorahs here at the White House. Some that weathered storms like Katrina and Sandy; others that were crafted by spectacular artists from Israel and the United States. But I’ve just got to say, this is my favorite. I think this is the most beautiful one that we’ve ever lit. And it’s a reminder that a menorah is not valuable because it’s forged in silver or gold. It’s treasured because it was shaped by the hands of a young girl who proves with her presence that the Jewish people survive. Through centuries of exile and persecution, and even the genocide of families like the Wiesels endured, the Hanukkah candles have been kindled. Each wick an answer to the wicked. Each light a signal to the world that yours is an inextinguishable faith.

Jewish leaders from the Maccabees to the Wiesels, to the college students who proudly sing Hebrew songs on campus, reaffirm our belief that light still drives out darkness, and freedom still needs fighters.