Here is Attorney General Jeff Sessions at a Senate Hearing on April 4, 2016:

Of course, this is the same guy who recently said that marijuana is “only slightly less awful than heroin” — which is not only false, but dangerously so.

Yesterday, in honor of 4/20,  CBS released a new poll on American’s attitudes about marijuana. The numbers demonstrate that Sessions is out on a limb on this topic.

Sixty-one percent of Americans think marijuana use should be legal, a five-point increase from last year and the highest percentage ever recorded in this poll. Eighty-eight percent favor medical marijuana use.

Seventy-one percent oppose the federal government’s efforts to stop marijuana sales and its use in states that have legalized it, including opposition from most Republicans, Democrats, and independents.

But just as important, here is what CBS found that relates to what Sessions said at that hearing last year: 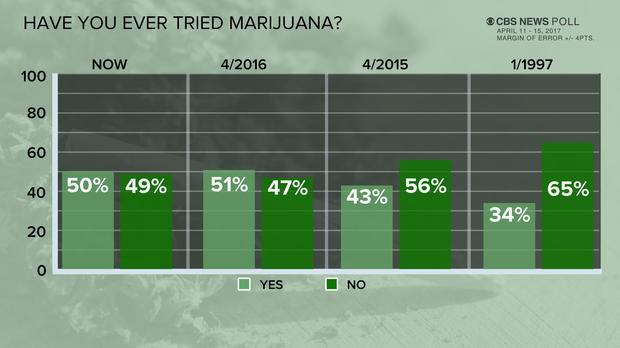 If I was writing for a left-wing equivalent of Breitbart, I might have titled this piece, “Sessions Says that Half of Americans Are Not Good People.” But that is not my style. Suffice it to say that, on the issue of marijuana, the current Attorney General is an extremist. This issue is quickly going the way of marriage equality and sooner or later the retrogrades like Jeff Sessions are going to find themselves (to use an apt metaphor) “blowing smoke.”