* Kirstjen Nielsen was confirmed as the DHS Secretary after the appointment of John Kelly to be chief of staff. She was present in the White House meeting last Thursday, but claims that she can’t recall whether the president referred to Africa, Haiti and El Salvador as shithole countries. Today she testified in front of the Senate Judiciary Committee and faced some tough questioning from Democrats. But Sen. Cory Booker expressed what a lot of us have been feeling. I encourage you to take ten minutes and watch his entire remarks. But here is a clip:

Sen. Booker to DHS Sec. Nielsen, who was in White House immigration meeting: "When ignorance and bigotry is allied with power, it is a dangerous force in our country. Your silence and your amnesia is complicity." pic.twitter.com/eR4zAsE2jF

* In another mark against her credibility, this also happened during Nielsen’s testimony.

Democratic Senator Patrick Leahy was questioning Nielsen about a meeting she attended in the Oval Office last week where President Donald Trump reportedly labeled Haiti and nations in Africa as “shithole” countries and said the U.S. should be bringing people from Norway to the U.S. instead. Trump’s comments have been widely derided as racist.

Leahy asked Nielsen whether Norway was a predominantly white country.

“I actually do not know that, sir,” she said during the meeting. “But I imagine that is the case.”

* Given the ongoing activities of Rep. Devin Nunes and the move last week by Sen. Grassley to refer Christopher Steele to the FBI for investigation, I have zero confidence in the congressional committees investigating the Trump/Russia connection. It all comes down to Mueller, who has just subpoenaed an interesting witness.

It has been a suboptimal month for Steve Bannon. First, the rabble-rousing populist and noted Art of War reader was booted from Breitbart, the website he made into a household name, after he ran his mouth off about President Trump’s family to Michael Wolff.

Now, Special Counsel Robert Mueller is on his trail.

The New York Times reports that last week, Mueller took the unusual step of issuing a subpoena to Bannon, directing him to testify before a grand jury. It’s the first time Mueller has employed this tactic to suss out information from a Trump adviser.

* Nothing captures the effects of Trumpism on human lives better than this video clip.

Upsetting footage shows the emotional moment a man was ripped away from his family by ICE after spending 30 years in the U.S. pic.twitter.com/g8osfX45KK

* Here’s some interesting twitter commentary on Trump and the media:

definition of gaslighting:
Trump: shithole country, prefer Norway. I said it and I'm proud of it
Reviews: Bad
International reaction: Bad
Trump: I didn't say it
Media: whether he said it or not is controversial

Trump: *Overtly racist statement*
CNN: Trump’s a racist.
MSNBC: Trump’s always been a racist.
Daily Stormer: We love our racist!
WSJ: Dude. You’re not making this easy for us.
NYT: Is the President a racist? Coal miners don’t think so.
Fox: Hillary is the real racist.

* One of the 2018 races I’ll be watching the closest is the Georgia gubernatorial contest. Democratic candidate Stacey Abrams was a guest on Full Frontal last week. 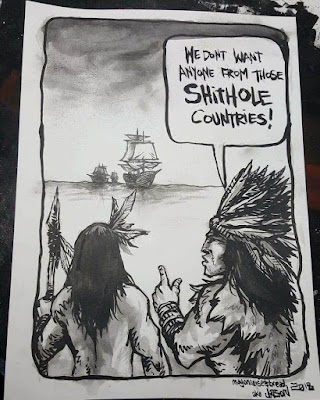 * Finally, she’s still got it!