One of the ways that Republicans demonstrate that they are the “post-truth” party is that, when Democrats are in office, they prioritize federal deficit reduction, but when they’re in charge, the deficit soars. Right on cue, the Wall Street Journal reported back in October that the federal deficit was about to reach $1 trillion.

The U.S. economy has been growing for 10 years as of July, the longest economic expansion on record. Yet annual U.S. deficits are on track to exceed $1 trillion starting this year, due in part to the 2017 tax law, which constrained federal revenue collection last year, and a 2018 budget deal that busted spending caps enacted in 2011.

When even Rupert Murdoch’s paper credits the Republican tax cuts as a contributor, you can take that one to the bank. Steve Benen put together a helpful chart to demonstrate what has happened to the deficit over time. 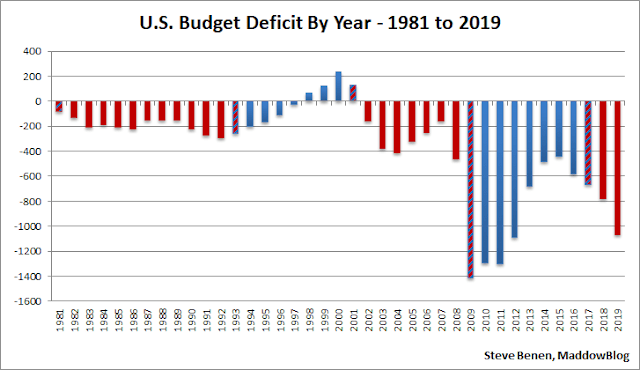 The blue bars during the Obama years were a result of the Great Recession when federal revenues plummeted, the demand for safety net programs like unemployment insurance rose, and one-time stimulus spending was required to kick-start the economy. But as the Wall Street Journal pointed out, we are now in the midst of the longest economic expansion on record, which means that the deficit should be shrinking. Instead, it is ballooning. In a world where truth mattered, that would mean the end of the Republican line about how tax cuts pay for themselves.

When Republicans were negotiating among themselves over their tax cut plan in 2017, they made it clear that their main goal was to reduce corporate tax rates. At the time, they complained that, at 39 percent, corporate tax rates in the U.S. were among the highest in the world. What they didn’t want you to know is that the effective corporate tax rate (what was actually paid after all of the loopholes were incorporated) was around around 29 percent, right in the middle of the pack for industrialized countries.

After a full year of implementation, the Institute on Taxation and Economic Policy documented the effects of the Republican tax cuts, which lowered the corporate tax rate to 21 percent. Here are their key findings.

* The 379 profitable corporations identified in this study paid an effective federal income tax rate of 11.3 percent on their 2018 income, slightly more than half the statutory 21 percent tax.

* 91 corporations did not pay federal income taxes on their 2018 U.S. income. These corporations include Amazon, Chevron, Halliburton and IBM…

The richest corporations are now paying an effective tax rate of 11.3 percent, while most of the huge monopolies are paying nothing at all. Rather than trickling down, those reductions are causing the federal deficit to soar.

Meanwhile, Republican Majority Leader Mitch McConnell went on a spending spree—literally bragging about his efforts to buy off Kentucky voters with what Mitt Romney once referred to as “free stuff” (emphasis mine).

Senate Majority LeaderMitch McConnell (R-Ky.) is delivering more than $1 billion worth of federal spending and tax breaks to his Kentucky constituents, just in time for Christmas and ahead of a potentially tough reelection campaign…

McConnell’s wins in the spending legislation included coal miners’ pension benefits; $410 million for the construction of the new Robley Rex Veterans Affairs Medical Center in Louisville; $314 million for cleanup of Paducah Gaseous Diffusion Plant, a $40 million increase over last year’s funding level; a tax break for spirits distillers worth an estimated $426 million in 2020 alone; and $65 million for the construction of the Forage Animal Production Lab at the University of Kentucky.

He also secured a tax break for Kentucky’s thoroughbred horse racing industry, $16.5 million for the Department of Agriculture to implement the pro-hemp provisions McConnell got into the 2018 farm bill and $61.3 million for new military construction projects at Fort Campbell.

We can have reasoned debates about federal deficits, taxes, and spending programs. But the naked lies from Republicans demonstrate that their approach has nothing to do with what is best for the American people. They have made it abundantly clear that their priorities are all about more money for the wealthy elite and an obvious power grab for those in office. It is beyond time to bust the myth that the GOP is the party of fiscal responsibility. They are nothing if not reckless and irresponsible.