Given the reigning hoopla over the “millions” of Americans suffering from being misled by the president into thinking they could keep their existing insurance policies under the Affordable Care Act, defenders of Obamacare are naturally struggling to put the problem, such as it is, in context. Fortunately University of Michigan economist Justin Wolfers has created a pie chart that estimates “winners” and “losers” under the new law. 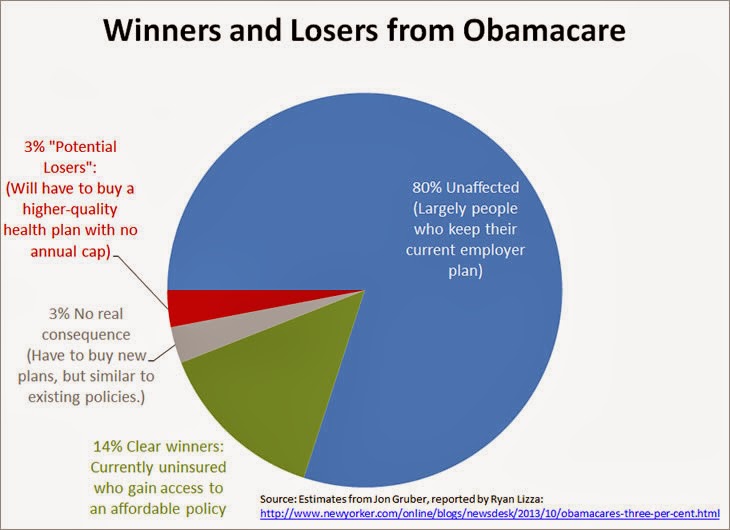 The numbers are based on estimates by Romneycare architect Jonathan Gruber of MIT, as reported in a New Yorker column by Ryan Lizza.

The bottom line is that the “losers” are people with really bad individual insurance policies that expose them to ruinous out-of-pocket costs. No, they don’t get to keep those really bad insurance policies, unless their insurers offer them without hiking premiums or changing other conditions, in which case they still can keep them; most insurers are refusing to do that. But these “victims” do get to buy much better insurance without fear of being disqualified for pre-existing conditions, and if their incomes are below 400% of the federal policy level, they qualify for tax credits to help pay for it.

Even if the “victims” are considered losers, notes Gruber in the Lizza piece, they are a very small part of the population:

Gruber summarized his stats: ninety-seven per cent of Americans are either left alone or are clear winners, while three per cent are arguably losers. “We have to as a society be able to accept that,” he said. “Don’t get me wrong, that’s a shame, but no law in the history of America makes everyone better off.”

Compare those numbers, moreover, to any of the Republican proposals for health “reform,” or to the trend lines existing in the status quo ante, and it remains by far the best option on the table.

UPDATE: Josh Barro challenges the particulars of the chart rather vociferously, while agreeing with the general assumption that “winners” will significantly outnumber “losers” under Obamacare, while a large majority will see no changes at all. A major bone of contention involves how quickly and thoroughly Obamacare will cover the current uninsured.